The soon-to-be confirmed nominee for secretary of Defense, Lloyd Austin, made no major pronouncements about technology policy during his confirmation hearing Tuesday, but he committed to working on overarching innovation and technology goals within the Department of Defense.

Austin, a decorated battlefield commander who ended a decades-long career in the Army as a four-star general, does not have deep experience in tech, but he showed an awareness of the DOD’s recent emphasis on those kinds of programs. He told the Senate Armed Services Committee that China was the No. 1 threat to U.S. strategic security and said he will work to ensure the DOD maintains and broadens its competitive advantage.

“We will have to employ the use of space-based platforms, we have to use [artificial intelligence],” he said. “This is not a choice, in my view.”

The expectation among military tech experts is that Austin will surround himself with the kind of tech leaders who can meet the challenges at hand, including working on new concepts like Joint All-Domain Command and Control (JADC2), where all battlefield networks will be linked and share data seamlessly with the help of artificial intelligence.

Even with good advisers and managers, though, the secretary would need to dedicate significant time and resources to thinking about technology, said Chris Brose, a former Senate Armed Services Committee staff director and current head of strategy at Anduril Industries.

“A level of technical understanding is required to call balls and strikes,” Brose told FedScoop in an interview. (Brose said he was aware that Austin has read his book “The Kill Chain” on concepts like JADC2 and the future of technology-driven warfare.)

Others shared Brose’s concerns about the need for those at the top of the Pentagon to dedicate significant time to technology modernization.

“I am anxious to see how the staff fills out in the coming months. Every nook and cranny of DOD has a stake in modernization,” Lindsey Sheppard, a fellow at the Center for Strategic and International Studies who focuses on emerging technology, told FedScoop.

Sheppard added she was not surprised by the tact of some of the questions and answers — and non-answers — during the hearing.

“Ret. Gen. Austin gave the answers I would expect given that, as he said, much of this requires working with the services and will require tough calls on competing priorities,” she added. “I would not expect him to box himself into any commitments in this particular setting at this time.”

Many project that the DOD’s overall budget will not grow, leaving a zero-sum fight for dollars between the services and for the secretary to make calls of how budget requests prioritize money. The fight for money could complicate ongoing risky modernization initiatives, like the Army’s contribution to JADC2, Project Convergence or the Air Force’s Advanced Battle Management System, which will be the technical backbone of the larger concept.

Austin committed to working with senators on technology issues, such as acquisition reform. He agreed with some senators that the DOD needs to move away from the approach where the department sends out hundreds of pages of requirements to industry and instead opt for a more innovative, solution-driven method without the rigid requirements.

There was one thing he was clear on: China is the U.S.’s preeminent security threat and global competitor, with much of that competition taking place on the technology front.

“I think that gap has closed significantly,” he said of the difference between the U.S. and China’s military might. “Our goal will be to expand that gap.”

He referenced needing to ensure the right operational concepts are in place to meet future threats. While Austin did not mention JADC2 specifically, he did say that connected battlefield networks would be a priority and that AI was a necessity. AI will play a key role in JADC2 by helping sift through data coming from sensors across the battlefield connected in the new operating concept.

Brose and Sheppard both agreed on one move by the Biden administration that signals technology modernization action on the horizon: nominating Kathleen Hicks as deputy secretary. She brings years of experience in defense policy and keen insights on modernization.

“She is the right person,” Brose said. Sheppard and many others have echoed praise for Hick’s experience and ability to help lead the department, especially on business practices and technology modernization.

The Senate Armed Services Committee approved Austin’s nomination Thursday. His full confirmation by the Senate requires a waiver from a rule for former officers to be out of uniform for seven years before taking a civilian DOD job. That waiver must pass both the House and Senate. The House passed the waiver Thursday afternoon 326-78, with the Senate expected to vote later in the day. 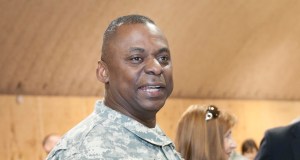 In confirmation hearing, Austin gives away little on how he would handle DOD tech as secretary