Editor’s Note: This story has been updated with new information about Roat’s selection.

The Office of Management and Budget has slated Maria Roat as a candidate to serve as the next deputy federal CIO.

Multiple sources confirmed to FedScoop that Roat, currently CIO of the Small Business Administration, is on tap to transition into the role under Federal CIO Suzette Kent in February.

However, one source close to the matter said several people interviewed for the job, and OMB is still finalizing its official selection and plans to make an official announcement soon.

The role became vacant at the start of the new year when Margie Graves retired from government. Graves told FedScoop in December it was “the perfect time in the cycle” to step away from the deputy CIO role after the office has passed a host of federal IT policy — including Cloud Smart and the establishment of the Federal Cyber Reskilling Academy — in 2019.

Roat, a longtime federal IT executive and one of the senior-most CIOs on the CIO Council, has taken on more leadership in interagency federal IT functions in recent years. She serves as the co-chair of the CIO Council’s Innovation Committee and on the board of the Technology Modernization Fund.

She’s also served as the Department of Transportation CTO and in a number of other roles, including director of the Federal Risk Management and Authorization Program (FedRAMP) and deputy CIO of the Federal Emergency Management Agency. She is retired from the Navy with 26 years of active duty and reserve service.

Guy Cavallo would take over as acting SBA CIO upon Roat’s departure.

Roat could not be reached for comment prior to publication. 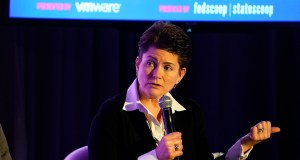 Maria Roat on tap to be deputy federal CIO