A small, informal group of Marines has banded together to bring greater digital understanding and modernization to the force, which has been late to adopt the digital trends embraced by other services.

The Marine Coders, as they call themselves, are on a mission to connect code-savvy Marines and educate others through open-source software projects and training. Their efforts are tied to advancing the guidance recently put out by the corps’ top officials to better take advantage of Marines’ time by automating away rote, time-intensive tasks.

The Marine Corps is the smallest military service but faces the same technology modernization challenges as the others. So, with fewer service members to take on that heavy lifting, corps leadership wants to use automation to offload some mundane tasks — a mantel the founders of Marine Coders have picked up as part of their mission. And the “few and the proud,” as the saying goes, are becoming fewer with the Marine Corps calling for a thinning of the total force, driving an even greater need for computer-based automation.

“We should empower everyone to automate the stuff in their lives that is literally no value add,” Capt. Collin Chew, one of the founders of Marine Coders, told FedScoop in an interview.

Chew and Capt. Andrew Hutcheon have organically grown the organization, evolving it into a community of a handful of coders. The founders say they anticipate growth in the near future based on initial interest.

So far, Marine Coders has taken on small challenges, Chew said: formatting word documents, building out listservs and finding ways to get basic software training to Marines. But as the group grows and works to become an officially recognized organization, its founders anticipate taking on bigger problems.

The group was modeled after a similar organization in the Air Force, Airmen Coders. The Marine Corps’ iteration was founded after Chew and Hutcheon spent time with the Air Force’s Platform One DevSecOps team. Inspired by what technology could do to empower the lives of service members, they sought out a way to bring more Marines together in the fight for digital modernization.

“What we needed to do was establish something like [Airmen Coders] in the Marine Corps,” Hutcheon said.

The coronavirus pandemic added even more fuel to their fire. At the outset of the maximum work from home posture, Chew and Hutcheon were a part of the team that helped build out the Air Force’s “Mattermost” secure chat function. Spending hours on calls with each other and the founder of Airmen Coders, Capt. Christian Brechbuhl, gave them time to dream up ways for Marines to get more involved in software. They pulled the basic foundation of the group together this summer and fully launched in September with a first hack-a-thon.

The partnership between the Air Force and Marines has allowed each to share best practices. One critical piece of their success is making “asynchronous” material, which can be viewed at any time instead of during live-video calls, to accommodate the military’s global presence.

“They took some best practices from us, made them better, and we are pulling [the practices] back,” Brechbuhl said in an interview.

Through Airmen Coders, members have already been able to publish applications on internal Air Force networks and on government-furnished devices. It’s a short-term goal Marine Coders wants to replicate. Chew and Hutcheon both said they don’t foresee a future where they direct all the projects coders work on, but instead allow Marines to take on the challenges they face in their own day-to-day work.

“We don’t want to restrict things that people can work on,” Chew said. “People want to solve things they are passionate about.”

Brechbuhl reports senior leaders are supportive of his initiative. Chew and Hutcheon say they already have seen support from senior uniformed leaders for “non-traditional” means at attacking problems. 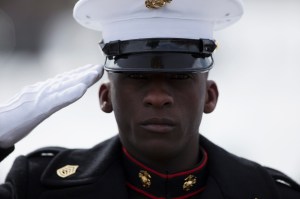 How a small group of Marines is advancing modernization with coding