Michael Rigas has been tapped to serve as the acting deputy director of management in the Office of Management and Budget.

Rigas replaces Margaret Weichert, who is leaving government service for a role at Accenture.

Like Weichert did for a long period last year, Rigas will pull double duty as both the deputy director of OMB and acting director of the Office of Personnel Management. Rigas had been serving as deputy director of OPM for the past two years but was asked to step up in the interim when Dale Cabaniss left as the agency’s director earlier this month.

In his role at OMB, Rigas will play a key role in leading the administration’s efforts around the President’s Management Agenda, continuing the efforts started by Weichert two years ago. IT modernization is a pillar of that initiative.

“Over the last two years Mike has been one of the key drivers of the President’s Management Agenda, so he is the ideal person to carry the management agenda forward. I know he’s going to do great work at OMB working to improve the Federal Government’s service and stewardship for the American public,” Weichert said in a statement.

During his time at OPM, Rigas has also played a key role in the administration’s efforts to reduce the federal government’s background investigation backlog and transfer the National Background Investigation Bureau from OPM to the Pentagon.

“We’re thrilled to have Michael join the OMB team. He brings with him a wealth of experience improving how organizations function. This will allow him to hit the ground running at this critical time,” said acting OMB Director Russell Vought. 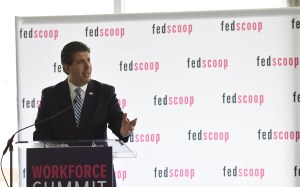 Michael Rigas to replace Weichert at OMB in interim