The military’s talk of wanting to connect its networks is not limited to just battle. New requests to emerging technology developers show that it is also taking that same approach for improving medical data and networks.

A consortium of medical enterprise technology developers has been asked to develop prototypes to link medical data, software and situational awareness across different parts of the military, from research labs to tactical responders. The solicitation adds another health data interoperability project to the ongoing major electronic health records overhaul programs the DOD is working on.

The request “aims to establish prototypes with the ability to provide commanders at all levels with visual understanding of how medical capabilities are arrayed throughout the operational environment,” the Medical Technology Enterprise Consortium wrote in a pre-announcement. That visibility will come from linking the disparate networks and software medical personnel in the military use.

The language and overall approach appear to mirror other major network modernization initiatives, such as Joint All-Domain Command and Control — the new operating concept the military will rely on to be able to link networks together and create a common data architecture for commanders to control troops and weapons in air, land, sea, space and cyber conflicts, all at once. The similarity here is creating networks that work together, not just within their own domain or digital stovepipe. 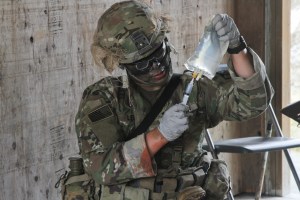