The vision for the JADC2 communication network-of-networks is connecting “every sensor, every shooter” by having data flow across the five domains of warfare: sea, air, land, cyber and space. The challenge is creating data structures that can link interoperable sensors around the world, from the wings of a brand-new fighter jet to a decades-old legacy system on a submarine. To restructure that world of data, the Air Force wants $302 million to support the acquisition of the necessary platforms, sensors and systems, according to budget request documents.

The Air Force wants to be the “lead service” to connect all domains to “truly operate at the speed of relevance,” Air Force Chief of Staff Gen. David Goldfein told the Senate Armed Services Committee.

Developing JADC2 will be an expansion from the “foundation” of the Air Force’s Advanced Battle Management System, which has the same goal of linking data from planes across domains, Secretary Barbara Barrett said during the hearing.

The service held its first test of the Advanced Battle Management System late last year.  Goldfein added that the Air Force’s goal is to build a “unified data library” and be able to test that sensors are linking across domains every four months. The $302 million requested to build out the technical elements of JADC2 is listed under funding specific to the Advanced Battle Management System.

The department already operates in three of the domains that JADC2 aims to link: space, air and cyber. Other branches of the military have shown interest in creating interoperable data structures that will work across services and domains. Goldfein said that in April the Air Force plans to run a JADC2 test that will link its drones with Army and Navy vehicles to ensure sensor data collected in the sky can be matched with data on the ground.

“Working as a team is where our future lies,” Goldfein said. He added, however, that many of the capabilities that the Air Force hopes to lead on remain classified.

The Army said this year is a “foundational” one for strong data management that will eventually lead to all-domain interoperability.

While the Air Force is optimistic about its move toward Joint All-Domain Command and Control, the dream of connecting “every shooter, every sensor” is one that still appears years away. The Air Force’s funding projections call for more than $1 billion in funding through fiscal 2024 for the program. 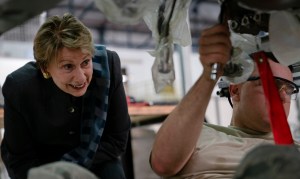