When you need computing power at the edge, often that means buying extra hardware for far-flung offices or maybe loading a system on to a truck. But for some agencies, getting compute to the edge means going to infinity, and beyond.

Thursday, NASA and Hewlett Packard Enterprise announced that they will test the limits of the term “edge computing” with a new computer designed to deliver artificial intelligence in space. Later this month, the new Spaceborne Computer-2 will become the first high-performance commercial computer to operate in space on the International Space Station.

HPE says Spaceborne Computer-2 will allow astronauts to process data that used to take months in mere minutes. Once launched and assembled in space, NASA will use it for at least the next two years, giving astronauts the power to use AI and other advanced computing capabilities that were once out of reach in space.

Bringing this type of computing capability to space “is just the first step in NASA’s goals for supporting human space travel to the Moon, Mars and beyond where reliable communications is a mission critical need,” HPE said in its release.

Getting and using computers in space is no easy task. First, just putting the hardware into orbit involves shooting it on a rocket — rattling, shaking and jolting through the atmosphere for minutes on end. Once in space, if the computer’s complex circuits still work, the zero-gravity environment and constant exposure to the sun’s radiation present further challenges. However, Spaceborne Computer-2 was built off a prototype launched into orbit in 2017. And HPE specially designed it to sustain operations in space, along with software coded for space-based work.

Astronauts will use the computer to process data from the space station, satellites, cameras and other sensors. Loaded with the necessary graphics processing units (GPUs), Spaceborne Computer-2 will be ready to process everything from photos of polar ice caps to medical images of the astronauts’ health, according to the news release. The GPUs’ processing power will be enough to fuel AI and machine learning capabilities, eliminating the need to send data back to earth for ground-based processing.

“Edge computing provides core capabilities for unique sites that have limited or no connectivity, giving them the power to process and analyze data locally and make critical decisions quickly,” said Shelly Anello, general manager of converged edge systems at HPE. 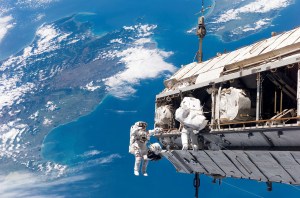