NASA won’t rush its planned mission to Mars in the late 2030s and risk human life, despite being in a “space race” with China, said Administrator Bill Nelson on Wednesday.

The agency awarded a now-contested contract to SpaceX in February to launch the initial components of the Gateway lunar outpost, where the rocket and supplies for the Mars mission will eventually be assembled.

NASA expects a decision from the Government Accountability Office in the next few weeks and to launch by the end of 2021, but China announced an ambitious plan to send astronauts to Mars by 2033 in June.

“The Chinese space program is also a military space program,” Nelson said, during a live interview with the Washington Post. “They are very aggressive and very good, and a lot of that success has come in the last few years.”

China was the second country to land a rover on Mars after the U.S. with plans to return samples from the planet to Earth “probably within the same timeframe,” Nelson said.

But the Pentagon has also reported Chinese development of anti-satellite weapons that threaten global communications and space exploration.

“The Chinese are very intolerant of any examination of their space program,” Nelson said. “They are very inflexible; they are not very transparent.”

Nelson contrasted that with Russia, which began cooperating with the U.S. on space missions during the Cold War and launched another “major component” of the International Space Station (ISS) from the Baikonur Cosmodrome in Kazakhstan on Wednesday.

NASA’s administrator said he’d support cooperation with China on space missions if they’d “open up,” but in the meantime, one of their satellites exploded in low-Earth orbit near the ISS and one of their rockets landed in the Indian Ocean without a controlled reentry.

“Space is the high ground and the important ground in trying to protect the interests of our country and the free world,” Nelson said.

Nelson said he also supported expanding public-private partnerships in space exploration. Commercial 3D printing of rockets will reduce the cost of space travel and make it more “accessible,” while SpaceX’s fixed-price contract to deliver cargo and crew to the ISS is enabling commercial space efforts, he said.

NASA will require that any space tourists going to the ISS endure the same training and medical and psychological training as its own astronauts so as not to interfere with their research, Nelson said.

“Yes there may be Bezos ideas of colonies out in space; yes there may be colonizing of Mars,” he said. “But we need to have the vision to get there and develop the technologies in order to sustain human life.”

NASA will “aggressively” look for evidence of life in samples returned from Mars and Venus, and a new space telescope will launch at the end of 2021 designed to look at the source of light 13.35 billion years ago, shortly after the Big Bang, in a search for other planets that might support life, Nelson said.

“In the next 10 years we’re going to put up five great observatories, and we’re going to look at oceans and land and ice and the atmosphere,” Nelson said. “And we’re going to compile a 3D composite of the minute changes that are occurring so that we can better project what we’ve got to do in order to save our planet by saving our climate.” 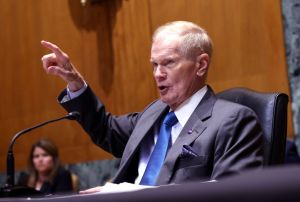