Amid the White House’s plans to boost U.S. quantum information science, the government’s premier research labs are being called upon not only to develop the quantum computers of the future, but also build the incipient workforce that will build and use them.

The Department of Energy’s national research laboratories must provide more opportunities to train the graduate students and scientists needed to staff a new industry, representatives from the Department of Energy, Microsoft and academia said Tuesday at a hearing by the Senate Committee on Energy and Natural Resources.

“If we are really serious about training the next-generation workforce, then we need to have projects for them to engage in,” said Irfan Siddiqi, director of the Berkeley Quantum research partnership between the Lawrence Berkeley National Laboratory and the University of California, Berkeley.

“Where will all of our [doctorates] go when they go when they finish working on this subject,” Siddiqi said. “In fact, academia and industry for me represent two particular areas, but there is a big area in the middle where, in fact, DOE labs can shepherd all of these nascent scientists.”

The White House Office of Science and Technology Policy released a national QIS strategy Monday that calls on the member agencies of its Subcommittee on Quantum Information Science to support efforts that bolster quantum research and innovation through projects like quantum-based grand challenge competitions and cooperation with academic and private sector partners.

But in addition to using the national research laboratories to foster R&D partnerships between those partners, the strategy also calls them to help build a “quantum-smart workforce” through academic, federal grant and other engagement programs.

Supratik Guha, a professor at the University of Chicago and a senior science adviser at the Argonne National Laboratory, said cooperation between the national research laboratories, industry and academic institutions can be used to develop training grounds for the quantum computer engineers needed to scale up the field.

Guha noted that this practice is currently underway at Chicago Quantum Exchange — a partnership between the University of Chicago, Argonne National Laboratory and Fermi National Accelerator Laboratory — where scientists are working with students on projects like a 30-mile optical fiber link to serve as a testbed for quantum entanglement and information transfer.

“Aiming to create a workforce, the Chicago Quantum Exchange has begun a program funded by the National Science Foundation to match students and their academic advisors across the country with industrial and national laboratory members,” he said.

But with so much focus going to the development of quantum technology in its early stages, Guha also said that the investment must be carefully managed to ensure the field is grown wisely.

“Today, for instance, most of the people involved in quantum information sciences come with physics backgrounds, chemistry backgrounds,” he said. “The material science community is just getting into it, the computer science community is just getting into it, but this now also needs to include the electrical engineers, the mechanical engineers and the packaging research people. So that whole ecosystem needs to be pushed out and that’s not happening right now.”

But on the strength of its existing research partnerships, the U.S. is in the position to quickly utilize its infrastructure to stand up these efforts, he said.

“We simply need to build on these,” he said. “I think if we do this smartly with our investments, we can continue to be ahead.” 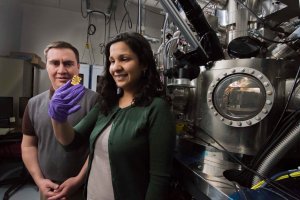 The message for national labs: Advances in quantum computing are about people, too