The Department of the Navy is currently reviewing and preparing to release an overarching cybersecurity strategy and vision statement that will shape how it operates moving forward as the modern battlespace becomes increasingly digital.

Core tenets of the new governance document are “secure, survive and strike,” the Navy’s Principal Cyber Advisor (PCA) Chris Cleary confirmed at an event hosted by CyberScoop and Okta on Thursday.

“Make no mistake: Cyber is a means and method of warfare that our adversaries are getting better at,” he said.

Though he couldn’t go into great detail ahead of its release, Cleary briefed FedScoop on the new strategy after his keynote address.

Shortly after he assumed the role of PCA in late 2020, Navy leaders directed Cleary and the service’s chief information officer to jointly draft a unified cyber strategy — and acknowledged the maritime branch’s serious need for a clear and comprehensive contemporary approach. Following a long development process, that strategy is now currently under an extensive review.

“General officers and flag officers in the Navy in the Marine Corps are all reviewing it, and we’re anticipating it to be published in a month. That is when it will be publicly available,” Cleary said.

Once completed and formally released, the strategy is expected to provide Navy personnel with deeper insights into warfare and cybersecurity that are specifically aligned with their military missions. It will include elements associated with enabling cyber forces, acquisition of additional tools that go beyond security, and a focus on critical infrastructure, according to Cleary.

“We do a good job of the enterprise [information technology] stuff. We are pretty mature in this space. Obviously we’ve got ways to go,” he said. But there are areas “where we haven’t been giving it the attention that’s deserved,” he added. “So we’re moving into critical infrastructure, weapon systems and the security of weapons systems, and then ultimately how we embrace cyber as a warfighting domain in the service.” 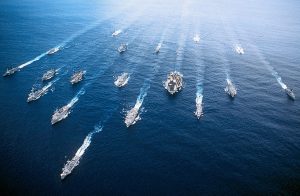