AWS Snowball facilitated temporary, end-to-end deployment of the app at sea in record time and then regularly connected and synced data on sailors’ temperatures and symptoms to the cloud.

“Five weeks deploying a pretty significant software system to a U.S. ship is unheard of,” said Fernando Cancel, lead architect on the Universal Naval AI Core Environment (UNACORN) project, during the AWS Summit on Wednesday. “Normally it takes years to go through all the wickets.”

Sailors used DDS’s app to self-report their health from hotels or ships, where they were quarantining, via personal devices or the ships’ computers. UNACORN had dispensations allowing Wi-Fi-enabled devices to connect to AWS Snowballs and complete the containerized app’s surveys on ships.

That data was then replication synchronized, or repsynced, off ships to the AWS GovCloud using Niagara Files (NiFi) for continued analysis by medical and health professionals and data scientists.

When Navy ships turn it hinders bandwidth, but UNACORN lived within its communications bandwidth budget and managed to send data to the cloud almost continuously with repsyncs to the minute.

“We also proved to Navy security that the only data coming off the ship was the data we wanted to come off and send straight to an endpoint, an S3 bucket at GovCloud,” Cancel said.

Ships never connected to any networks for cybersecurity, so instead they used a single AWS Snowball’s application programming interfaces to sync back to the cloud.

“The browser would only let you do one thing on the Comcast server, which would only let you do one thing in the database, and that database was being dropped on S3, which could only send certain data out S3 secure critical transport back to the cloud, and that was a cloud endpoint,” Cancel said. “So with every one of those steps, none of those systems or resources could do anything more than what it was supposed to.”

Sailors couldn’t surf the web using the browser, for instance.

AWS Snowballs costed $92,000 for eight, and the success of the COVID-19 Health Tracking one-off has programs using UNACORN for long-haul projects.

With the pandemic easing, deinstallation of the app off ships began in February. The last kit was pulled off the USS Ronald Reagan in March.

“We’re hoping the pandemic is not a permanent thing,” Cancel said. “So we had an integrated test plan and very specifically said it was a limited time to collect the data.” 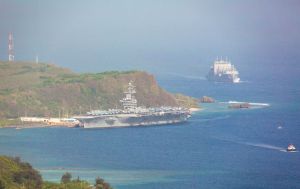