When the Navy docked ships off the shores of New York City and Los Angeles in March to help with surging cases of COVID-19, some drone hobbyists from the surrounding communities were naturally curious.

During the months when the “floating hospitals” U.S. Naval Ships Mercy and Comfort were caring for patients on both coasts, civilians frequently flew their drones over the ships into what is considered restricted airspace to get a bird’s-eye view of the rare sight. Though seemingly not a direct threat to the doctors and other personnel on board, the curious hobbyists created an airborne hazard that could potentially interfere with operations.

So, the Navy called on the Defense Digital Service‘s Rogue Squadron counter-unmanned aerial systems team to provide its suite of counter-UAS technologies to detect and monitor the drones and provide a deeper picture of their flight patterns to determine if action would be needed to ground them.

“They’re not people that are, you know, terroristic. They’re not threatening us, but they’re still dangerous, just from the perspective of we don’t know they’re there,” said Dan Flack, a program manager for DDS’s Rogue Squadron. “And we have people that we’re trying to protect on the ground, we have assets flying through the air.” While the ships are considered mobile, floating no-fly zones, the restricted areas are not programmed into the devices like other FAA regulated areas —such as airports, stadiums, military bases and Washington, D.C. — which would outright prohibit drones from entering that airspace.

The Navy and DDS had worked together before on counter-UAS operations, and the Navy thought it would be helpful to have a deeper general awareness of the airspace around the ships. It’s no easy task to look up into the sky and spot a very small UAS flying in the surrounding airspace, Flack said in an interview with FedScoop. New York City, in particular, has had an incident in the past in which a drone collided with a helicopter flying over New York Harbor.

“Is there a drone there, is something flying? Is it safe for us to send this [helicopter] off the deck?” Flack said.  “All of those sorts of questions that previously would have to be, you look up there in the sky with your eyes, and you kind of squint a little bit and say, ‘I don’t see anything, we’re good to go.'”

The curious drone pilots might think their actions harmless, but in reality, they could be interfering with operations. “They don’t realize that by being curious with a drone, they’re actually derailing efforts to make those ships operational or impeding the ability for regular daily operations,” said Angela Cough, a DDS digital services expert.

DDS provided its Windtalker and Dowding systems to the Navy for the job. Windtalker is the sensor detection platform modified from commercial hardware. Dowding is the backend user interface to provide situational awareness for the data pulled from Windtalker.

The exigency of a military counter-UAS pilot program came about several years ago with the surge in commercial drone production. Most often, the DOD is concerned by what drone use means in forward-deployed, hostile locations.

“We started seeing a large emergence of the use of small aircraft, specifically, DJI aircraft back in early 2017 in deployed locations. It’s $1,000, you can go online, buy it, have it shipped to wherever you want,” Flack said. “If you’re a terrorist organization … you can get this capability, you can modify it and use ingenuity and come up with a way to have effects. And it’s really, I wouldn’t call it air superiority, but our bases are threatened from the air again, with just something as simple as $1,000 toy drone or professional photography drone.”

Both of DDS’s c-UAS platforms have the “capability to pretty much outperform everything else that there is available, both in the commercial sector and in the end in the military sector,” Flack said. And because they’re custom-built with DDS values in mind, the systems are agile, user-friendly, and the data is owned by the government. In particular, the Rogue Squadron wanted to make it so DDS could deliver the systems to a partner — in this case, the Navy — that could begin using them in a matter of hours or days.

“Let’s go to the user. And let’s see what the user wants. Right? It’s not our problem, it’s theirs. So we went to them. And we started with some small groups. And we eventually started scaling up more and more and more,” Flack said of the platforms’ development.

Combined, Windtalker and Dowding give users a common operating picture of the airspace roughly 30 kilometers out, Flack said. “Nothing else can quite do that.”

Building a pattern for the future

The engagements with the Mercy and Mission, again, are quite different than those DDS typically supports abroad, where an unidentified drone poses a much bigger threat. In those cases, users could default to drones as a threat — but in a domestic scenario, they can’t jump to the same conclusion.

For this reason, DDS’s support of the naval ships in NYC and LA was as much a learning opportunity as it was to provide situational awareness. “Let’s put the sensors out there and let’s learn the most that we can about them,” Flack said. (Though there were at least a few cases in which local law enforcement was brought into to further investigate, the DDS team said. They couldn’t comment further, due to the sensitivity of the information.)

During the operations with the Navy, DDS learned quite a bit. In NYC, the team tracked 464 flights from 231 unique aircraft, about half of which were repeat fliers. “We had one drone that we repeatedly saw 16 times,” Flack said.

Similarly, in LA, during what was a slightly longer engagement, DDS saw 940 flights from 375 unique drones, with about half of those, again, flying more than once. The top repeater entered the airspace 21 times.

In both cases, roughly 18% of total flights were from the same handful of drones coming back to the spaces on different days, DDS officials told FedScoop.

What does this mean to DDS? It’s all about building understanding and awareness of drone activity in a domestic environment.

“They’re just numbers, you don’t really know what the operator was doing each time it took off, and why were they flying that day?” said Flack. “But ultimately, you know, it’s still interesting in that you have about 18% of the detections we got sparking some sort of interest from our perspective. It becomes a question of is that somebody that’s doing something else? Or are they just taking photos? And that’s when we can dig a little bit deeper in our data and do analysis to help us understand other threat mechanisms.”

And hopefully, over time, this data will give DDS and military services a better sense of what’s threatening drone activity, and what’s just a hobbyist being nosey, so that during future domestic engagements — perhaps during a major protest or a presidential rally — they know what patterns to look for.

“There’s a tremendous amount of activity that I think just provides us with that much more data to then evaluate and really review to see what kind of activity occurs but to also start to create a picture that we can understand what’s normal drone behavior in the area,” Cough said. “How can we use that data to then provide some level of situation or decision making … so we don’t have somebody who’s all of a sudden getting ready to shoot a drone out of the sky when it’s not necessary.” 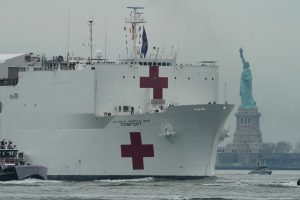