The Navy wants to “re-envision, re-architect, and re-deploy” its IT networks and chart a new path of modernization in response to last year’s blistering review of its cybersecurity, according to a newly released memo from the CIO’s office.

The memo, called “DON CIO Information Superiority Vision,” outlines a complete overhaul led by CIO Aaron Weis, who occupies a post that was elevated late last year in response to a watershed cyber review in March. The mantra of the effort will be “modernize, innovate, defend,” according to the memo.

The first step, modernizing, calls for a complete redesign of the Navy’s IT systems, with an emphasis on throwing out legacy systems that are “fragmented, non-performant, outdated, and indefensible architecture” and moving to unified systems capable of outpacing adversaries.

The second step, innovating, will center on developing emerging technologies, according to the memo. Wireless 5G technology and artificial intelligence are name-checked in the memo, and the creation of “Digital Innovation Centers” will aim to speed up software development.

The final piece of the puzzle, defending the modernized networks, will be as much of a human and culture shift as technological. The Navy has weathered high-profile cyberattacks both on its industrial base and its own networks. To better defend, acting Secretary of the Navy Thomas Modly urges in the memo that all sailors and Marines should be “Cyber Sentries” and for the enterprise to move away from “checklist security.”

“We will not be able to stop them unless everyone does their part to protect the advantages digital information provides,” Modly writes.

One goal outlined by the memo is to better integrate data across the Navy’s disparate sensors, systems and locations across the globe. But this means starting small. Simple tools like file sharing, cloud collaboration and chat tools are early goals for the service.

Loftier ambitions outlined by the memo include using AI to analyze the integrated data flows. But automated information analysis appears far off as the Navy faces the more pressing need of streamlining its networks.

In the current state, “forward-deployed Sailors and Marines must manually contextualize raw data from multiple unintegrated systems,” the memo notes. This poor user experience causes users to find workarounds or face the burden of working across the many disparate networks.

“The DON needs a network capable of delivering actionable information to the point of need,” the memo says.

Thus, the Navy wants a complete redesign of its unclassified, secret and top-secret networks. The Navy notes that it has a lot of examples to draw from — decades of stagnation means there are plenty of new directions to follow. The Air Force and Army, for instance, are both in the midst of major network overhauls driven primarily by IT-as-a-service models that look to commercial vendors to supply network services, freeing up the services to focus on their more demanding IT mission needs.

The service will also look to replicate “the best practices of industry to lay down a new network foundation and migrate to it,” the memo states.

The memo stresses the need to avoid “building on the DON’s rich history of building duplicative information systems.” Reducing redundancies in the IT portfolio is a target for budget reduction, according to a separate memo from the acting sectary published Wednesday.

While looking at other services’ networks, a unique challenge the Navy will keep in mind is the need to distribute computing power to the edge, such as ships in the middle of the ocean. Network disruption — whether it’s from stormy seas or enemy attacks — is a reality the Navy faces in abundance, so developing edge computing and network architectures that can withstand partial or full dismemberment will be critical.

“We must maximize this bandwidth-rich environment to prepare for times of limited connectivity,” the memo states.

Another reality is the need for increased bandwidth — a technical hurdle 5G promises to solve. But the technology is still being fielded in the private sector and may take time to make its way to Navy ships. 5G is being tested on DOD bases as the U.S. races to keep pace with Chinese competitors that the U.S. says poses a security risk, like Huawei.

“As we move to the cloud, we will require more bandwidth to move increasingly large amounts of information between the tactical edge and enterprise,” the memo states.

The memo ends stressing that all technical solutions for better cybersecurity hinge on the people that use them. The cyber readiness of the department needs to be on the same level as physical fitness and weaponry. The memo suggests a tech-oriented version of the old Marine Corps adage: “every Marine a rifleman.”

“We must remain vigilant every day from boot camp to retirement,” the memo states. 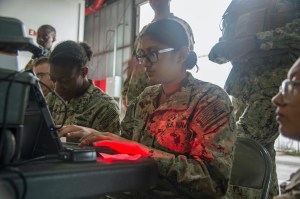 Navy outlines a path to completely redesign its networks