NASA is going back to the moon to live and work — and also maybe make rocket fuel.

“That’s space technology that we need to develop,” NASA Administrator Jim Bridenstine said Thursday during a speech at the Florida Institute of Technology. “How do we get the use of those resources?”

He was referring to the hydrogen and oxygen components of the water ice found recently at the southern pole of the moon. These elements, he said, will not only serve to sustain human life on the moon but also, NASA hopes, enable the moon-bound Artemis mission to create rocket fuel.

This “in-situ resource utilization,” as Bridenstine put it, is part of NASA’s intent to return to the moon in a “sustainable” way by 2024. Other technologies that the mission will need include:

“We need to figure out how to use the resources of the moon to live and work there for long periods of time,” Bridenstine said.

The other news Bridenstine announced on Thursday pertain to contracting for the moon mission. Colorado-based space technology company Maxar, he said, will build the power and propulsion elements of the lunar orbital station Gateway that NASA is designing.

NASA is making investments in technology that will help the county get to the moon through various avenues. A number of the companies involved in space agency’s Phase II Small Business Innovation Research (SBIR) program grants, announced last week, are working on artificial intelligence-powered tech, including a LIDAR sensor for autonomous lunar landing. 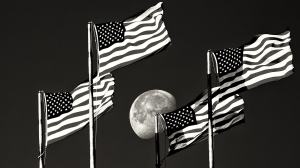 Needed at NASA: tech for living and working on the moon