On Tuesday afternoon, the new class of Presidential Innovation Fellows took a trip to Capitol Hill to meet with the man who made their current jobs possible.

The Presidential Innovation Fellows program was created by then-President Barack Obama in 2012 as a way to lure top tech talent to the federal government for limited-time “tours of duty.” The effort could have been a casualty of administration changeover, though, if not for the TALENT Act, which Majority Leader Rep. Kevin McCarthy, R-CA, introduced in the House. In a dramatic turn of events (retold Tuesday by McCarthy), the bill became the last signed into law by President Obama.

So now the program is here to stay, and finally, 10 months into the start of the new administration, the General Services Administration has revealed the names of the new cohort. Most of the class started in their new federal roles six weeks ago.

The 10 fellows — known as PIFs — hail from Texas, New York, California and even the D.C. area. They’re strategists and academics and entrepreneurs and designers. And, for the next year, they’ll be embedded at the Census Bureau, Department of Transportation, Department of Veterans Affairs and National Institutes of Health.

In addition to the 10 new faces, nine fellows from past cohorts are staying on to continue their work within their agencies, GSA announced.

The new class is a bit smaller than some past cohorts, but the Presidential Innovation Fellows program, essentially a matchmaking service, depends both on a pool of applicants and on agency interest (and hiring authority) for places to put those applicants. Since 2012, the program has introduced “over 120” technologists to federal government work, GSA says. PIFs have played key roles in federal technology initiatives like the Data.gov launch, the Police Data Initiative, Blue Button and the RFP-EZ platform. Some have also gone on to continue service in government, joining groups like GSA’s 18F.

“Everyone has a part to make their government better,” Rep. McCarthy told the incoming group on Tuesday. “You have a really critical part.” 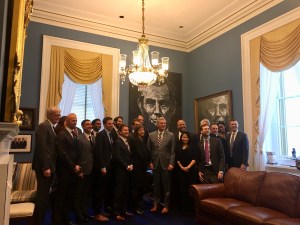 The new class of Presidential Innovation Fellows is here