The National Geospatial-Intelligence Agency unveiled a new platform Monday to make it easier for anyone to get their hands on the agency’s wealth of geospatial data.

The platform, dubbed GEOWorks, gives large and small companies, academic institutions and other interested individuals an opportunity to access NGA’s data and tools, NGA Director Robert Cardillo said Monday at the 2018 GEOINT Symposium in Tampa, Florida. And it fits right in with a goal he stated last year of better partnering with the private sector through public-private partnerships.

Anyone with a Login.gov account can sign in to the platform, according to a press release. The new site was designed with an agile approach and completed, “from concept to launch,” in eight weeks, Cardillo said.

“It is a much easier way to access and work with NGA’s data,” he said in a keynote address.

Cardillo explained that NGA is loading about two dozen of its own data sets and several other open source data sets onto the platform, with plans to add more. The data didn’t yet appear to be available on the website as of Monday afternoon.

GEOWorks also includes access to tools, such as a “GEOINT Viewer,” which is designed to help people visualize bulk geospatial and temporal data from various sources.

Cardillo said visitors will also be able to access tools, such as Jupyter Notebook and TensorFlow, via a tool called “Symphony,” developed by the MITRE Corp., an NGA partner.

GEOWorks also includes a listing of ways to engage with “Team GEOINT,” he said.

“In the future, expect this page to fill up – and to be the primary location to access NGA engagement opportunities,” Cardillo said during a demonstration of the new GEOWorks site.

The first such opportunity posted is a hackathon with U.S. Special Operations Command through its SOFWERX lab. The “Hack-n-Hunt” is a “story-based live ‘mission’ competition in [Tampa neighborhood] Ybor City,” designed to “advance open geospatial standards, software, and sensor technology for use with portable, disconnected devices,” according to the event page. 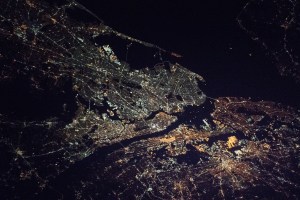