Dogwood in Manassas, Virginia, and Cactus in Phoenix are configured identically: operating three times faster than their predecessors at 12.1 petaflops and boasting double the storage at 26 petabytes each.

The twin Hewlett Packard Enterprise Cray supercomputers, ranked 49th and 50th fastest in the world by the TOP500 project, will provide NOAA’s NWS with:

NOAA is moving from deterministic models to ensemble-based systems that couple atmosphere and oceans, giving forecasters the ability to assess the probability something might happen.

“Being able to provide probabilistic information to the public, through the use of ensemble-based modeling systems, is going to be a very exciting change coming up,” said Brian Gross, director of NOAA’s Environmental Modeling Center.

NOAA further plans to launch a new hurricane forecast model, the Hurricane Analysis and Forecast System (HAFS), ahead of the 2023 hurricane season — pending tests and evaluations. HAFS replaces two legacy systems, and will predict the track and intensity of tropical cyclones.

NWS will be able to extend hurricane forecasts to seven days, Graham said.

Dogwood and Cactus’ predecessors were located in Reston, Virginia, and Orlando, Florida — a problem if a catastrophic weather event hit the East Coast downing both. That’s why the new supercomputers are hosted on opposite sides of the country.

WCOSS is an eight-year base contract with a two-year renewal. While its predecessor included performance enhancements on the front end — requiring IBM to guarantee price performance 10 years out — NOAA only required GDIT to propose the first task order award for this contract.

“I’m actually really excited about that because it leaves us open to be able to look at what are experiences on the existing system, where we need to make improvements in balance in the computing system, or as different technologies evolve we can take advantage of those and not be strapped to that initial price performance guess,” said Dave Michaud, director of NWS’s Office of Central Processing.

NOAA anticipates the second phase task order, covering the last five years of the contract, will be awarded in the 2024-25 timeframe.

The agency will work with GDIT to identify industry trends and incorporate those, along with any new computing requirements, into the next phase of WCOSS. 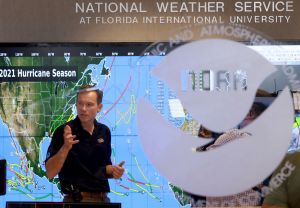