Sen. Orrin Hatch unveiled Thursday his tech priorities for the 115th Congress, including plans for ensuring the federal government’s IT infrastructure is up to date.

The chairman of the Senate Republican High-Tech Task Force laid out goals that include commitments to ensuring the federal IT infrastructure is secure against cyberattacks; support for innovative transportation technologies; and plans for working on issues such as copyright modernization, patent reform and encryption.

In a speech on Capitol Hill Thursday, the Utah senator also urged the tech community to let him serve as its contact to President Donald Trump.

“As one of the earliest senators to endorse President Trump, I can serve as a bridge between the president and the tech community,” he said in remarks as prepared for delivery. “I spent nearly an hour in the Oval Office with him last month. Help me help you work with the president to accomplish our shared goals.”

In his “Innovation Agenda for the 115th Congress” Hatch includes a commitment to “ensure that the federal government’s IT infrastructure is up to-date and adequately equipped to guard against cyber and other attacks.”

The veteran senator has the ear of his colleagues not only the task force, but as chairman of the powerful Finance Committee and as a senior member of the Judiciary Committee, which has jurisdiction over privacy issues, cybercrime and other tech topics.

Hatch’s speech on Thursday only touched on some of the issues in his agenda, and didn’t include much about securing federal IT infrastructure. His tech agenda for the previous Congress, announced in 2014, had more to say about improving cybersecurity by facilitating information sharing between industry and government, and by building a skilled cyber workforce.

In his new agenda unveiled Thursday, Hatch also mentions supporting the development of Internet of Things technology, and coordinating the responsible deployment of autonomous vehicles and unmanned systems such as drones.

“I mention these topics in tandem because they present a similar challenge: How do we create a sound regulatory framework that adequately protects safety and privacy without stifling the tremendous advances we’re seeing?” Hatch said Thursday, noting “there’s no simple path forward on these issues.”

Hatch also asked for feedback on issues around innovative transportation.

In concluding his speech, Hatch reiterated his pitch to help the tech industry.

“I think the President trusts me,” he said in his prepared remarks. “And I can help impress upon him the importance of the issues I’ve been discussing with you.” 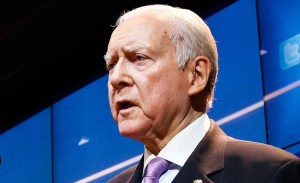 Nods to IT infrastructure, innovative transportation are on GOP senator’s tech agenda