Prior to the COVID-19 pandemic, the National Cancer Institute relied on “expensive and not user-friendly” custom systems for its telemedicine. But as the need to see patients remotely grew over the past year, the institute turned to commercial software that could more easily support its scaling needs, CIO Jeff Shilling said.

NCI began using Microsoft Teams to communicate with and administer telemedicine to patients in clinical trials. This let both the NCI doctors and researchers and the patients stay safe while continuing care.

People had their doubts about using commercial software for such a highly sensitive mission set. But it was a crisis, and NCI was forced to go into crisis mode to make the move.

“Never let a good crisis go to waste,” Shilling joked during an SNG Live session Thursday. But on a more serious note, he said of people’s concerns using Microsoft Teams for sensitive communications, “Listen, we’ve got to talk to these people. We have many people dying of cancer — many, many millions of people dying of cancer — we can’t worry about some of these things.”

NCI did work with Microsoft to “make sure that everything was encrypted properly, everything was a unique connector,” Shilling said, adding that Microsoft did everything “really well,” rising to the occasion because it too was in crisis mode.

At the end of the day, the new model was successful, Shilling said, because the commodity IT was ready to scale immediately and it was user-friendly from the start — and, perhaps more importantly, it was cheaper.

“The doctors don’t use special medical computers, they use Macs and PCs, just like everybody else,” he said. “So they have all the benefit of using these commodity tools. And so we think we can use these commodity tools in telemedicine as well. And that’ll extend past the patient, to radiology, to pathology, all these things that we can start to use the standard tools, it’ll make it just much, much more portable. And we need that. We need it because we need more medicine for more people. And the only way we can do it is to make it less expensive.”

Dr. James Gulley, director of the Medical Oncology Service at NCI, and his team were some of the first to make the move to Microsoft within the institute last spring. He said in an interview published by the National Institute of Health that his team “quickly got used to the platform, and it became our preferred means of communication between team members, other collaborators and patients.”

“This has opened up opportunities for us to communicate more effectively with patients at home,” Gulley said. “Phone conversation can get some of the information however much of communication is nonverbal. This also provides improved efficiency for patients and healthcare providers and decreases costs in both money, time and potential exposure to SARS-CoV2.” 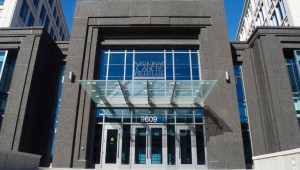