A Pentagon-housed advisory commission on artificial intelligence wants to see the Department of Defense have a stronger chief technology officer to accelerate the military’s fielding of AI technologies, the panel’s leaders said Tuesday.

The CTO needs more authority over writing and executing a technology annex to the National Defense Strategy, instead of overseeing the investment and acquisition of current technology programs and research, according to the National Security Commission on Artificial Intelligence‘s third-quarter recommendations for 2020.

The job is a relatively new one, spun off from the former office of acquisition, technology and logistics, or AT&L, in 2018. The acting CTO is currently Michael Kratsios, whose official title is acting undersecretary for research and engineering. Kratsios is also the U.S. government’s official CTO, which is also a relatively new position.

The NSCAI says that it’s time to revisit the law that created the office.

“It really didn’t empower the CTO,” says Bob Work, former deputy secretary of defense and vice chair of the NSCAI. He and commission Chairman Eric Schmidt, who once ran Google, place significance importance in the CTO because it has oversight of the billions of dollars invested on basic artificial intelligence research. The commission has consistently recommended increasing those types of investments to advance AI development.

The commission recommends that the CTO’s office take stronger control over technology “scouting” offices within the DOD, and it calls for the CTO to be the executive agent in charge of programs within the DOD that have eyes over the global technology landscape.

Those moves would help the DOD “really start to have a top-down push for AI-enabled applications,” Work said.

The report also calls for the CTO to be the chief science adviser and co-chair of the Joint Requirements Oversight Council (JROC) for new networked and cross-domain technologies, like the network-of-network Joint All Domain Command and Control. The vice chair of the joint chiefs of staff currently leads the council.

“It really matters how high you are in the organization,” Schmidt said. If placed lower than the vice president’s office, it won’t have “heft.” 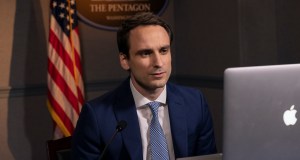