The General Services Administration and the Department of Defense have continued to award spots for prime contractors on the 10-year ASTRO procurement.

Technology giant CACI has won a prime position in each of the contract’s 10 pools. Other recent prime contract awardees include ACET, Hexagon US Federal, General Atomics, Parsons and Smartronix.

The Department of Defense (DOD) is the largest sponsor of ASTRO, which is focused on procuring unmanned systems, robotics and platforms, as well as the services that support such systems.

The acquisition vehicle was initially conceived as a mechanism through which the National Aeronautics and Space Administration (NASA) could obtain new technology such as satellites and drones, and was subsequently expanded to meet the DOD’s needs. Services for intelligence, surveillance and reconnaissance missions are a core component of ASTRO

The procurement vehicle is administered by the Federal Systems Integration and Management Center at the General Services Administration (GSA). It has no defined ceiling, and contracts awarded it are expected to stretch to at least $90 billion.

In July, GSA revealed that it had so far awarded over 300 spots to federal contractors as part of the procurement. Awardees include contracting giants Boeing, Booz Allen Hamilton and Leidos, in addition to smaller, veteran-run entities and many others.

The ASTRO solicitation was issued on August 24, 2020, and offers were due on October 30, 2020. It is the first GSA contract vehicle to use Section 876 authority, which authorizes evaluation and award at the contract level without consideration of price or cost. 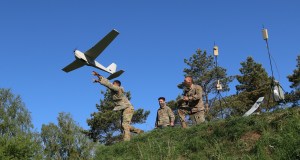