Air Force Lt. Gen. John “Jack” Shanahan, director for defense intelligence for warfighter support and leader of the Pentagon’s Project Maven team, is confident he’s on the verge of delivering machine learning algorithms that will meaningfully help in the fight against ISIS.

Project Maven was developed to help Air Force analysts make better use of full-motion video surveillance by automating some of the basic labeling and other grunt work analysts are currently doing by hand.

In an exuberant keynote before NVIDIA’s GPU Technology Conference in D.C. on Wednesday, Lt. Gen. Shanahan made it clear that he believes artificial intelligence and machine learning are vital to the United States’ future warfighting capabilities.

And he’s leading a small, 12-person team intent on operationalizing these possibilities — at least in one area. The focus? Data overload.

Today, teams of highly trained analysts spend hours and hours looking at mid-altitude, full-motion video and live video footage from drones. These analysts scour the video for activity and clues in the fight against ISIS, and there is simply way more footage than they can meaningfully deal with.

“We’ve run out of people to throw at full-motion video exploitation,” Shanahan said. He’s also concerned that this isn’t the best use of human talent — rather he envisions “human-machine teaming” as a more efficient and more precise solution.

So in April 2017, then-Deputy Secretary of Defense Robert Work established the Algorithmic Warfare Cross-Functional Team (AWCFT),  tasked with figuring out how to “turn the enormous volume of data available to DOD into actionable intelligence and insights at speed.”

For the past six months, Lt. Gen. Shanahan and his team have been marching toward this goal and they’re confident that they are on schedule to deliver the first iteration of these algorithms by next month.

The team has kept to this schedule by following a simple mantra, Lt. Gen. Shanahan said — “start small, stay focused and win early.”

There are so many more applications for AI and ML in the Defense Department, so many requests for attention. So the team has had to keep the blinders on to stay focused on full-motion video exploitation and keep up with the 90-day sprint cycles required by Project Maven’s establishment. Lt. Gen Shanahan mentioned that he has drawn inspiration and best practices for this iterative style of project development from the likes of DIUx and the Defense Innovation Board — a group of industry leaders that has recommended that DOD invest more in AI, among other things.

As it happens, elsewhere on Wednesday, Defense Innovation Board Chairman Eric Schmidt also spoke about AI in the DOD, but his remarks were a little more aimed at urging the department forward rather than celebrating what’s been done. The government needs to act quickly to avoid losing its lead in this area of technology, Schmidt said.

All those other applications for AI and ML? He’s confident that, with help from the trail forged by Project Maven, the DOD will get there.

“The pebble called Maven has been dropped into the DOD operational pond,” Lt. Gen. Shanahan said. “The ripples have started to spread. They’re going to get bigger and bigger and get faster and faster as they expand. But this is the starting point.” 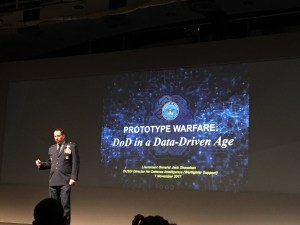