Maybe there’s no need to bring back the Office of Technology Assessment after all, a new report suggests.

Rather, Congress’ best avenue toward increased science and technology capacity lies in enhancing the capabilities of the advisers it already has — like the Congressional Research Service and the Government Accountability Office.

That, and Congress should hire a “Congressional S&T Adviser” to oversee the whole situation.

This is the central recommendation of a congressionally mandated report by the nonpartisan National Academy of Public Administration (NAPA), which set out to survey the resources for science and tech support that currently exist in Congress, and identify where the legislative body may need more. The report also looked into whether there is a need for Congress to create a new entity to give advice on science and tech, something like the erstwhile Office of Technology Assessment (OTA), or if the creation of such an agency would lead to duplication of services.

Ultimately, while the study’s authors found that there are “gaps” in existing services, they concluded that these can mostly be addressed by existing organizational structures. For example, CRS and GAO’s new Science, Technology Assessment and Analytics team, could both be developed and tweaked to provide more of what Congress needs.

The one new thing the report does suggest is that Congress create an “S&T advisory office” that would focus on “strengthening the capacity of Congress to absorb and utilize science and technology policy information provided by GAO, CRS and other sources.”

“During the course of this study, it became clear that improving the capacity of Legislative Branch entities to provide S&T policy resources is only part of the equation,” the report reads. “Success will depend also on the ability of Congress to absorb and utilize the S&T policy information provided by these entities whatever option is chosen.”

This requires, among other things, hiring staff with science and technology expertise, something the S&T advisory office could facilitate, per NAPA.

The idea of reviving or recreating OTA has become increasingly popular in the past year. In July, the House’s Select Committee on the Modernization of Congress officially recommended that the office be recreated. In September, 2020 presidential candidate Elizabeth Warren put her support behind this as well. 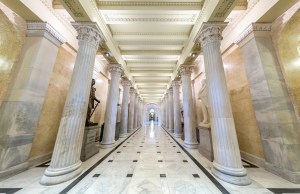 Report to Congress: You have (most of) the tech capacity you need