Language included in the draft Strengthening Agency Management and Oversight of Software Assets Act bill (SAMOSAA) has prompted fears that the proposed legislation could make it harder for agencies to switch away from software systems sold by some of the biggest incumbent players.

In its current form, SAMOSAA mandates agencies to negotiate better prices from tech companies through collective bargaining, and to purchase unlimited software licenses from a single software provider where possible.

Speaking with FedScoop, one acquisition expert who has worked on software contracts for GSA and other agencies said: “If you grant unlimited enterprise licenses to Microsoft, Oracle and other big players, then it makes it much harder for non-dominant players to get a foothold in the market. If an entire agency buys its software from a big player for some years then how will it ever decide to buy from a smaller player in the future?”

Software procurement scholar and former Director of the UC Berkeley Center for Long-Term Cybersecurity Steve Weber also cautioned that while the legislative proposals may help the government achieve better value for money, the push to consolidate contracts could give each federal agency fewer options.

He said: “The bulk discount for the government from the SAMOSA Act is great but I’m worried about large sections of the government using the one [piece of] software and a monopoly occurring.”

Staff working for the bill’s sponsor, Sen. Peters, D-Mich., disagree with this view. They say the bill will help to save taxpayer dollars and encourage innovation in government by reducing duplicative software purchases.

FedScoop exclusively obtained details of SAMOSAA earlier this month from the Senate Homeland Security and Governmental Affairs Committee, that if passed into law, would require government departments to purchase unlimited software contracts and require greater software interoperability from services they procure from Big Tech companies.

SAMOSAA passed the Senate HSGAC committee last week and is expected to get a full Senate vote in the coming months.

In sum, IT acquisition experts speaking with FedScoop gave a varied picture of the benefits and potential challenges for federal agency technology leaders posed by the legislation. Here are some of the principle strengths and weaknesses of the bill they described:

SAMOSAA would build upon the Megabyte Act, which was enacted in 2016, and compelled agencies to report licensing information on software contracts struck with technology companies. Since it passed into law, that legislation to a degree has increased lawmakers’ visibility of what IT services federal agencies are using and saved taxpayers more than $450 million since being signed into law.

Multiple experts told FedScoop the bill could improve cost savings by forcing agencies to conduct more comprehensive independent reviews and audits that ensure they have a clearer understanding of agency software licenses by cost and volume.

It would also direct agencies to provide shared services or other assistance capabilities to support agency enterprise license adoption, transition to open-source software, cost savings, and performance improvements, the IT acquisition specialists added.

In particular, section four of the proposed legislation directs the chief information officer of each agency “to develop a plan … to improve the performance of, or reduce unnecessary costs to, the agency, adopt enterprise license agreements across the agency.”

According to software procurement scholar Steve Weber, the bill would likely lead to short term harm of enterprise software providers like Amazon, Microsoft, Oracle and others because the federal government would no longer be buying software it doesn’t need. However, Weber added that this short term decline in profits would greatly benefit the health of the software ecosystem in the long run for both tech companies and the government.

Speaking with FedScoop, the acquisition expert who has procured software for GSA and other agencies said the legislation could be tweaked to avoid giving big software providers an advantage.

“The SAMOSA Act is a good start but we need more meat on the parts of the bill that encourage interoperability so that it’s easier for the government to switch providers in the future.” he added.

Weber added also that he was concerned that the consolidation of government agency software contracts could lead to a “mono-culture of narrowing software options that could exacerbate the single cloud single software security and vulnerability issues that exist currently.”

He said: “Interoperability is also good for the country, its citizens and technology. Locked in customers like the federal government are good for the bottom line of some companies but bad for tech, innovation and customers in long run.”

He said that Congress could add more strength and accountability to the interoperability elements of the bill to force software companies to compete on price performance, security and features, rather than choosing a software because it is too expensive or difficult to switch to an alternative provider.

An aide for Sen. Peters pushed back on criticism of the bill, saying it has received bipartisan support for the primary goals of the bill which are to save taxpayer dollars and encourage innovation in government by reducing wasteful software purchases.

The aide added that the bill is likely to improve the state of cybersecurity within federal agencies by increasing the visibility that federal Chief Information Officers have in their software purchases to ensure agencies are buying and appropriately updating the most secure software. 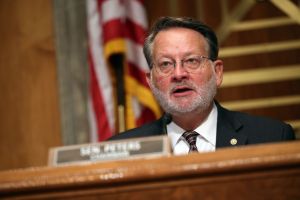