The President’s Management Agenda was always designed to be an interlocking set of goals, with data, workforce and IT modernization projects dependent on one another to help agencies be more effective and efficient.

The pair, speaking at the Association of Government Accountants Shared Services Summit, pointed to efforts to establish technology and policy standards across the federal enterprise as an example of this. They’re a pivotal piece of the Office of Management and Budget’s plan to both drive efficiency and modernize technology, they said — and shared services are a natural extension.

Both Kent and Murphy have been tapped to drive shared services reform as part of the PMA’s CAP goal 5, but the U.S. CIO said that because so many agency IT systems are in need of upgrades, by establishing a shared baseline of standards, the CAP goal helps make that modernization more efficient.

“When we look at the full scale of what we need to modernize, it is a huge agenda,” Kent said. “So I see the shared services agenda absolutely linked with the IT modernization because it’s a way we can pick a common set of solutions and move a large group quickly to a more modern, more secure better service platform and, going back to the PMA, a better mission stewardship.”

But the mission of shared service is not new, and the challenge for this administration, as well as previous ones, has been illuminating the commonalities between agencies that shared quality services can address, rather than their mission-specific differences.

Murphy pointed to the challenges in crafting GSA’s shared NewPay system, which saw a $2.5 billion contract award in September. NewPay establishes governmentwide payroll standards that agencies can leverage with new technology solutions to make better-informed decisions. She said there was an initial heavy lift to develop those standards from their disparate predecessors, but the potential gain makes it worth it.

While both noted that the PMA’s goals have been designed to be flexible enough to address and adapt to individual agency needs, Murphy said that GSA’s own self-assessment of its payroll needs revealed the juice of common standards far outweighed the squeeze bridging them over individual needs.

“We found that we seemed to have 100 areas where we had unique needs. So that led to a lot of conversations where we found out that we don’t have unique needs,” she said. “It took some hard reckoning on our part to be honest about that and be willing to admit that, in many cases, the benefit from being special was going to be far less than the benefit we’d get from being part of the collective.” 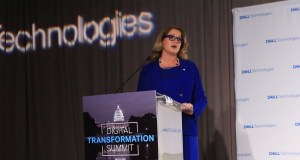 The gospel of shared services resonates across the PMA, say Kent and Murphy