Despite all the prototype contracts and research grants the Department of Defense feeds to eager startups, that work rarely scales to the type of multimillion-dollar deals the government gives to big prime contractors. It’s a frustrating reality for both sides, particularly as Pentagon officials clamor to infuse emerging technology into defense systems.

But there are ways to keep startups invested in government work once the initial projects are finished. Artificial intelligence company Shield AI recently inked the kind of deal that could set an example for other small firms that work with emerging tech.

Shield AI entered a partnership with defense and aerospace company Textron Systems to develop prototypes and scale its work with the DOD. The relationship, which took “months” to come together, according to both companies, will couple the startup’s autonomy-enabling AI with Textron’s robotic vehicles, with the goal of protecting troops in battle.

“We had long tracked the work that Textron was doing,” Gayle Lemmon, a partner and chief policy and marketing officer of Shield, said in an interview. “Together we could take their leadership … and really think about what we specialize in, which is operationalizing AI.”

Officials at Shield AI did not want to talk about exactly how the two companies would work together, saying it could damage the security of the project. Lemmon did say that the project began with a “proof of concept” that was based on their “shared values.” A Shield AI spokesman teased at more announcements coming soon from “well-known” partners.

So far, Shield AI’s main customer has been U.S. Special Operations Command — a fit that makes perfect sense: The company’s offices are nearby in San Diego, and co-founder Brandon Tseng is a former Navy SEAL operator. Shield AI, unlike some of its Silicon Valley counterparts that have a more complicated relationship with military work, was created expressly with the goal of serving the Pentagon.

But any company with that kind of profile, working with SOCOM — which has unique purchasing acquisition authorities and can buy technology in smaller batches — has limitations. Scaling up work both within the command and to service-level acquisition is where revenue can become more sizable, more stable and more appealing to talented tech workers.

In September, the company announced it won a $7.2 Small Business Innovation Research (SBIR) contract with the DOD’s Strategic Capabilities Office, a sizable chunk of change compared to the initial $100,000 of family-raised seed money the company started with, according to a recent profile in Wired. But now that the company employs about 150 people, a single-digit million-dollar contract through a program like SBIR may not be enough for the long term. (Shield has investments from firms like Andreessen Horowitz, Breyer Capital, Homebrew, and Silicon Valley Bank.)

No surprises from analysts

News of Shield’s deal with Textron came as no surprise to Nathan Ruiz, managing director for partnerships at government technology accelerator Dcode, he told FedScoop. Analysts have found a common way tech companies big and small work with the government is through subcontracts and partnerships.

“Partnering with primes is often the quickest way into [the federal market],” he said. It also is often a boon for the big primes that don’t need to invest in developing its own emerging technology which is a hit-or-miss game. Ruiz leads Dcode’s efforts to help small companies team up across industry and also coach big primes, or “systems integrator” companies, on what makes a successful partnership with startups.

“Aligning with good emerging tech companies is the best thing a systems integrator can do to remain at the forefront,” Ruiz said.

The key for small companies is to prove viability in their products and business. Primes don’t want to have to tell a government agency they won’t be able to deliver because the startup folded after six months of burning through investment cash. And for the primes, it’s all about being open to new tech and seeing how emerging trends can advance their own products, Ruiz said.

For a customer like the DOD, getting emerging technology in the Pentagon is the easy part. Getting it to scale — recurring and large purchasing orders that a company can regularly fill — is the hard part. Senior officials have said that hindrance to scaling is in part due to its risk-averse culture and acquisition practices that can take years. Those in industry have described the space between small research grants and earning contracts that can be a part of a company’s bottom line as the “valley of death.”

Other emerging tech companies that have tried to jump that valley with partnership include TrueFace, a facial recognition company that recently partnered with Modzy, a Booz Allen Hamilton enterprise AI platform. Deloitte also recently won a contract with the DOD’s Joint AI Center that requires them to subcontract with small emerging tech companies.

Helpful for the primes too

Large prime contractors that are tuned into the inner workings of the federal procurement bureaucracy can create inhibiting bureaucracies of their own. Working with small emerging technology companies can provide them with new life and innovation.

“Our work with Shield AI epitomizes our long-standing approach of how we help our customers distill an array of industry potential into meaningful and mission-ready solutions,” technical director for Textron Systems, Sean Baity, told FedScoop.

For Shield and Textron, the partnership could bring the type of AI applications other research shows the DOD is most interested in fielding. The partnership between the two companies aims to deliver autonomous systems that can assist troops on the battlefield, taking on tasks that can help keep humans out of harm’s way.

“We are forging strategic partnerships with other firms linked to the national security industrial and innovation base. We are also having ongoing discussions with others outside of the defense industry,” Raval said. Shield didn’t disclose how many companies it is partnered with, only saying it continues in “collaborating with several industry partners,” and that the mystery number could grow soon. 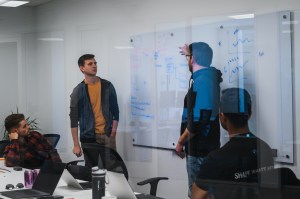