Editor’s Note: This story has been updated with the winner of the Spark Tank competition.

Judges in the first Air Force Spark Tank competition chose a modification to a platform used in mid-flight aircraft refueling as their winning innovation.

Air Mobility Command Tech. Sgt. Bartek Bachleda redesigned part of the the KC-135 aircraft boom platform so that vulnerable airmen controlling the boom — the plane’s refueling mechanism, operated from a small control room on the bottom of the plane — would be less prone to injuries, which stem from the position in which they must lie in the pod.

Bachleda said the current design of boom pods was leading to frequent “back and neck issues,” one of his team’s biggest concerns.

After the win, Bachleda said “it will stop people from getting hurt. It will make sure that mobility and readiness is at the highest possible for the KC-135.” He’ll receive funding to continue developing his winning idea, as will other Spark Tank finalists, according to the Air Force.

“I didn’t come here to win,” he said. “I wanted senior leadership to see this problem in front of them and explain to them that we can save the Air Force all this money.”

The Spark Tank competition is yet another example of how the Air Force is doubling down on innovation.

Beyond partnering with the Boston-based accelerator program TechStars to bring external technologists to the table, the force is looking to empower the entrepreneurial passions of internal innovators as well. This week, six Spark Tank finalists presented their ideas to senior leaders at the Air Force Association Air Warfare Symposium in Orlando, Fla.

Secretary of the Air Force Heather Wilson first announced the inaugural Spark Tank effort during a conference last September. “Airmen will be able to compete and pitch their ideas to increase the lethality of the force, and to reduce the cost of bringing power to the fight,” Wilson said in a statement at the time.

With that, Wilson kicked off a multi-stage process during which innovators at different Air Force commands submitted ideas to the Airmen Powered by Innovation portal to be judged. The whole concept, according to the new AFwerX innovation ecosystem that cohosted the Spark Tank initiative, is to encourage and celebrate innovation.

“By employing this model we hope to encourage intrapreneurship, retain innovators, and speed adoption of emerging technologies, especially those developed by Airmen to bring game changing impact to our Force,” the AFwerX site reads.

Eventually, the six finalists were selected.

Among these is a tool for aircraft maintenance utilizing augmented reality, a machine that would sort brass bullet cartridges more quickly than humans can, a common access card reader for improved security on mobile phones and more.

One idea — a more modern take on how to assess the suitability of different airfields for different aircraft — would take what is currently a process of reading a text manual and comparing it with a diagram, and make it so that arriving airmen can simply select their aircraft and the desired airfield and see a simple, color-coded description of the suitability.

Ideas like this and those of other finalists can make the lives of airmen easier but also have the potential to increase safety and decrease cost.

“The pace of change is accelerating and the Air Force knows the next generation of innovators are the ones who will take us into our future,” Secretary Wilson said. “I know the true source of our military might is not merely in the investments we make but in the courage and ingenuity of our people, and the innovative spirit that has made our Armed Forces the envy of the world.” 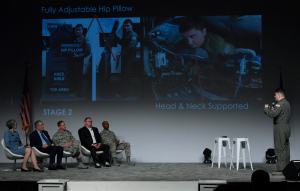