U.S. Special Operations Command, the elite group that undertakes some of the military’s most sensitive and high-stakes operations, is prioritizing finding technology to improve the encryption of its communications, its commander said Thursday.

“I personally changed our modernization priorities and restructured our funding to modernize those capabilities,” SOCOM Commander Gen. Richard Clarke told the Senate Armed Services Committee during a hearing about the need for stronger encryption as quantum computing emerges as a threat to traditional security measures.

For the past two decades, SOCOM has mostly focused on fighting non-state actors with limited tech. But as the entire military pivots to great power competition, it’s expected that strategic competitors like China and Russia will bring more-advanced cybersecurity and technology means to any fight.

During Thursday’s Senate hearing Clarke did not mention any particular new electronic warfare or encryption tools, just saying they broadly would be used to hide his operators’ movements from enemies.

“We also have to have encrypted communications and electronic warfare capabilities so that our forces…reduce the probability of them to be targeted,” he told lawmakers.

As quantum computers become more readily available, the concern is that they will be able to guess passwords and break through the layers of security in current communications technology. Other military agencies like the Defense Information Systems Agency also announced research into quantum-proof encryption.

Other new priorities for the command are “data and data management,” Clarke added. SOCOM has been a leader in testing new artificial intelligence capabilities, like predictive maintenance for its helicopters. The command has touted itself as being a sort of beta tester or “pathfinder” for AI tech the DOD can possibly use at scale. 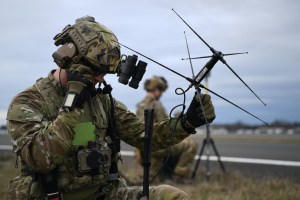