The force has plans to host the first “Space Pitch Day” in the spring where companies will present ideas for the potential to win a cash award on the spot. The Air Force has awarded billions of dollars during pitch days, a model the young Space Force plans to copy.

The Space Force is also looking to speed up tech acquisitions by opening its contracts to consortiums of vetted companies that can bid on proposals and other transaction agreement (OTAs) contracts.

Already, the Space Force has seen success working with consortiums. The Space Enterprise Consortium, for example, has produced anti-jamming satellite communications technology for the force, Lt. Gen. John Thompson, commander of the Space and Missile Systems Center, said Wednesday. The tech was piloted during large-scale tests of the Air Force’s Advanced Battle Management System in September where it successfully maintained communications despite electronic interference. That accomplishment is one Thompson and other leaders hope to replicate across a broad range of tech types.

Mozer emphasized that the Space Force will need new cybersecurity tools to better protect satellites and other space assets. Already, Space Force has inked deals with cybersecurity companies for zero-trust network design and other means to protect information generated in and transmitted through space.

“Future warfare is really going to be much more information-centric,” Mozer said.

Another new acquisition model the Space Force plans to use is Section 804 Middle Tier Acquisition, Thompson said. It’s a process that allows contracting officers to rapidly acquire prototypes without needing to go through the typically lengthy procurement process. With the recent expansion of the commercial space industry, many technologies are in the early prototyping phase, allowing for more use of Section 804 processes. 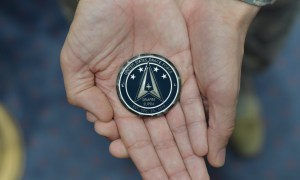