Special Operations Command wants better intelligence collection and intel fusion capabilities, and officials plan to take a hard look at their drone portfolio to determine which systems are no longer needed.

SOCOM acquired a slew of unmanned aerial vehicles (UAVs) to meet requirements for the wars in Iraq and Afghanistan. But some of those might no longer be needed as the command pivots to new technologies and great power competition with China.

Systems will be reviewed as the command undertakes long-term planning for capabilities development and resource allocation.

“We need to take a comprehensive look at all of our programs,” he said. “As we’re going into some specific discussions about future POM [program objective memorandum] cycles, there are some things that we need to look at hard and go, ‘Is this really what we still need within our formations?’ We’ve got to take a whole full-throated effort towards that because we’ve got to point towards China, but we still have other missions we’ve got to do.”

The command is less interested in remotely piloted drones and is looking for UAVs that can operate more autonomously and reduce the manpower burden for Special Operations Forces (SOF).

“Unmanned systems have shown great value to SOF operations and will continue to show great value. The issue for us is, we have a small formation and everyone in that formation is dedicated to a certain task. And if I’ve got to pull an operator to have them go one-on-one to operate that unmanned system, I’ve just pulled them away from the tasks that they’re … supposed to be doing,” SOCOM Acquisition Executive Jim Smith said.

He continued: “That’s why we’re really interested in autonomy to be able to get the operator off of the Xbox controlling the unmanned system, and back over their rifle sights and doing what they were paid to do. And so that’s where I think unmanned systems will go in the future.”

“We have focused for the last 20 years on airborne ISR overhead capabilities that allow us to look down and see [and] sense the enemy with multiple pods on top of them,” Clarke noted. “We’ve got to layer in the space capabilities with that, we have to layer open-source data with that. And we have to be able to pull that all together. And those things that are flying above, we need to make sure we have the best capabilities on top of them. So, as I look at next-generation ISR I think that’s something that still needs further development, because … just buying overhead UAVs — that is not going to be the solution in the long run.”

SOCOM aims to take ISR data collected by a variety of unmanned systems, fuse it with data collected from satellites and cyberspace, and provide it to SOF at the tactical edge to improve their situational awareness. Artificial intelligence and machine learning could help SOCOM sort through the sensor data and separate the wheat from the chaff, and give commandos the information they need to accomplish their missions.

“That’s what we think next-generation ISR looks like,” Smith said, adding that a lot of AI and data transfer will be required to enable that. 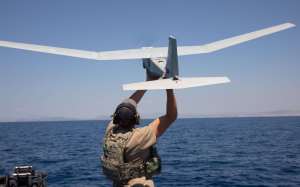