The State Department has started work on allowing overseas posts to customize their business applications in the cloud.

“The goal really is to make sure that we can manage a cloud-based environment that will allow us to provide the posts the local configuration capabilities they need to be able to deliver to their business customers, while doing it at an enterprise scale, securely, with a single identity,” Merrick said. “And with a single contract and funding model so that we don’t have the overhead costs.”

Pilot posts are being selected based on app maturity, meaning they’ve been refactored and replatformed into containers. Other factors being considered are levels of security, austerity and connectivity to ensure good user experience, Merrick said.

“Right now we have some procurement delays that have set us back a little bit, so we’ll see if we can make up the time,” he said. “But we want to get representational pilots done by the end of the year, and they’ll start soon in some of those environments.”

The department has a number of other cloud-based projects in the works at overseas posts. One pilot is testing remote processing of high-value asset data — including feeds from other agencies — off premise without internet connectivity and then connecting to a SAS cloud on the backend.

Another project aimed at improving user experience is moving the entire department to a cloud-based tool for a single sign-on.

The department’s CIO is starting an agencywide working group to bring business users across agencies together to retool the business architecture, which should lead to additional efficiencies, Merrick said.

Change management and policy challenges continue to crop up along the way.

In pursuit of a hybrid cloud environment, some posts want to use SAS data surveyors hosted behind State Department firewalls on-premise, which presents a new security paradigm, Merrick said.

“Traditionally, I think our government posts think, ‘Well, cloud’s over there, we’re over here,’” he said. “Now we’re starting to blend those two business activities, which is requiring new security policy.” 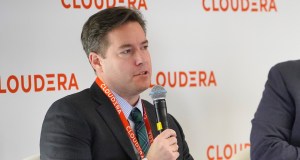