The State Department has delivered new Wi-Fi capability to more than 100 posts around the globe under a network modernization program the Bureau of Information Resource Management is calling Tron.

To end users at foreign posts, it might just seem like they’re getting Wi-Fi for the first time with much better speeds. But according to newly appointed State CIO Kelly Fletcher, it’s about delivering that enhanced user experience while providing better cybersecurity for those posts to reflect the more modern way the department is doing business today.

With Tron, Fletcher told FedScoop in an interview on the DailyScoop Podcast, “we’re doing all sorts of cool things so that our routing changes,” speeding up connectivity for officials at State’s hundreds of posts around the world.

“Historically, doesn’t matter where you are; you’re in Nairobi, you’re in Santiago,” Fletcher said. “Your traffic goes from you to D.C., then to wherever you need it to go. That does not make sense. That is not a modern way to operate a network.”

The solution State is delivering, she said, is more “point-to-point interactions,” with Wi-Fi being a part of that. At the same time, Fletcher said it’s an opportunity to boost the cybersecurity posture of those posts through improved identity management and network segmentation, key tenets of a zero-trust architecture, which State, like the rest of the federal government, has set as its model for modern security.

“What I’m trying to do … is to couple cybersecurity with capability for users,” she said. “My team is going to do a bunch of things that are transparent to the end user. They aren’t going to see them at all, I hope. But what they’re going to do is they’re going to increase our cybersecurity posture, and they’re really important. But while I’m doing those things and I’m spending, you know, State Department resources to do them, I also want to provide capability to the user while I’m providing enhanced cybersecurity.”

“We stopped doing this sort of like ‘hoover up’ everything through D.C. The end user doesn’t need to know that — they may see that things are a little bit faster, they’ll be happy about that. But the key thing is for that end user, they are getting this new capability, which is Wi-Fi, right, which they love,” she said. “They love having a laptop. They can work from different desks, they can move around the embassy.”

And with zero-trust capabilities baked in, “we make sure only the right folks are accessing the right things,” Fletcher said.

The State Department’s cybersecurity is “a matter of national security,” said Fletcher, who has experience protecting some of the nation’s most sensitive data as a former principal deputy CIO of the Defense Department. As “one of the most attacked organizations in the world,” State’s network modernization and cybersecurity modernization are imperative.

That’s why cybersecurity is at the heart of the department’s highly anticipated $10 billion EVOLVE IT procurement, which is accepting bids from industry through Jan. 25.

“How we do business today is that we’re going out to the cloud,” Fletcher said. “And actually EVOLVE reflects that … One of the five functional categories [for bid under the contract] is cloud and data services. So a lot of my applications are on the cloud. A lot of my data is on the cloud, it is not in my immediate perimeter. And because of that, we need to frankly have a new cybersecurity architecture, and that’s the zero-trust architecture.” 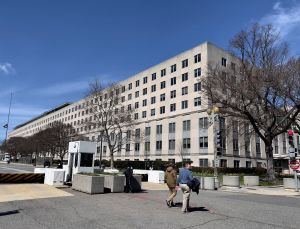