The Department of State this week began operations of a new Office of the Special Envoy for Critical and Emerging Technology dedicated to the intersection of technology and diplomacy.

Secretary Antony Blinken first introduced the concept of the new office in October 2021 during a speech on his wider modernization agenda, asserting that the State Department must play a role in shaping “the digital revolution that’s happening around us and making sure that it serves our people, protects our interests, boosts our competitiveness, and upholds our values.”

The office will bring on and coordinate additional expertise around tech policy, diplomatic leadership and strategic direction for State to address emerging tech, according to a release.

“We want the internet to remain a transformative force for learning, for connection, for economic growth, not a tool of repression,” Blinken said then. “We want to shape the standards that govern new technology, so they ensure quality, protect consumer health and safety, facilitate trade, respect people’s rights. We want to make sure the technology works for democracy, fighting back against disinformation, standing up for internet freedom, reducing the misuse of surveillance technology. And we want to promote cooperation, advancing this agenda tech by tech, issue by issue, with democratic partners by our side.”

During the same speech, Blinken also announced the department’s new Bureau of Cyberspace and Digital Policy, which launched in early 2022.

Seth Center will serve as the deputy envoy responsible for standing up and building out the office. He will report to Deputy Secretary Wendy Sherman through Ambassador at Large for Cyberspace and Digital Policy Nate Fick.

“Dr. Center has extensive experience working at the intersection of national security and technology policy in and out of government,” said State Department spokesperson Ned Price during a press briefing.

Price added that the new office will “provide a center of expertise to develop and coordinate international technology policy, and to engage foreign partners on emerging technologies that will be transformative to our societies and our economies — including biotechnology, advanced computing, artificial intelligence, and quantum information technology.” 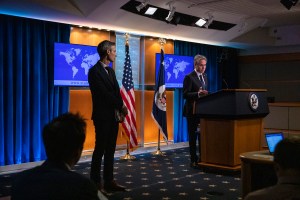