Sue Gordon, whose long career at U.S. spy agencies ended last year after a shakeup at the top of the Office of the Director of National Intelligence, has landed at Microsoft, the company confirmed Friday to FedScoop.

According to a tweet by Tom Burt, the company’s corporate VP of customer security and trust, Gordon — a former principal deputy director of national intelligence — will be consulting on “security, national security and leadership topics.”

Gordon was a longtime proponent of improving the intelligence community’s IT, with a steady refrain that those agencies must be “fast followers” of what the commercial market develops.

“Sue will be helping us with a wide range of projects central to our mission to protect our customers and improve the security of the internet ecosystem globally,” Burt tweeted.

Gordon resigned from the ODNI in August 2019. Her boss, Dan Coats, had tendered his own resignation, leaving Gordon with a path to a job as acting director, but reports emerged that President Trump intended to block her from taking the role.

Gordon recently talked about that time in an interview with InStyle. “On the one hand, it was awful because it was my life’s work and I’m good at it, and there’s no reason in the world that the president shouldn’t trust me,” she said. “I don’t know who was served by this. And I don’t understand the real basis. It hurt.”

Earlier this month Gordon was selected to receive the Intelligence and National Security Alliance’s William Oliver Baker Award, which recognizes extraordinary contributions to the intelligence and national security affairs of the United States.

Prior to her ODNI leadership role, she served as deputy director of the National Geospatial-Intelligence Agency, where digital transformation was a top priority. She also spent close to three decades with the CIA.

Gordon was a multiple FedScoop 50 awardee and appeared on FedScoop’s Top Women In Tech list. 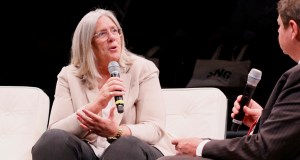