The board leading the new $100 million Technology Modernization Fund has picked four agencies to present their final case for modernization funding.

U.S. CIO Suzette Kent broke the news on Government Matters’ Sunday morning show, explaining her intention, as head of the TMF Board, to move quickly.

“This time next week the first four proposals that are moving to the second phase will actually have the letters in their hands inviting them to start that process,” Kent said. However, she wouldn’t say which agencies submitted the proposals of the nine in total that OMB said had applied. In phase two, the four agencies are “invited to present their proposal for further funding consideration,” Kent’s office said in a statement to FedScoop.

The board is moving quickly, indeed. Kent has been in her role less than two months, and the board’s membership wasn’t set until early March. The board’s first meeting was soon thereafter on March 12.

“It’s important to move quickly so that we can actually deliver impact,” Kent said on the show. “We are thrilled to see such interest and excitement from the agencies. The board has been very lively and diligent in going through those proposals.”

All of the received modernization proposals were great ideas, she said, and in each case they were “something that needs to be done.” But the four selected were those “that have the broadest impact across government, the most citizen impact, reusability, a lot of those key criteria.”

She elaborated on that: “What we saw was clear alignment to the priorities that were laid out. Absolutely modernization, cloud email, citizen impact around portals, things that we want to do to move off of legacy systems — so very clear alignment. We also saw very thoughtful attention to how they’ll deliver results and the surety of the approach to the outcomes that they want to achieve. And in many of the cases, the teams were very thoughtful about how it not only benefitted their agency, but there was broad impact across the government, whether that was building a best practice, whether it was sharing some of the lessons learned or whether the actual outcome was something that could be used by other agencies.”

In the interview, Kent detailed more about what makes proposals successful, such as how they are the ones the board believes can “demonstrate results as early as possible” and the most sustainable in the long term.

The key now is to wait and see who will win how much and for exactly what type of modernization project. Kent did hint that even though there’s up to $100 million to split among the eventual winners, that doesn’t mean the board will dole it all out immediately.

“We may actually indeed award some smaller amounts, look and confirm the results, ensure that the impact is what we expected and then continue the path forward,” she said, adding, “the ability to deliver results is critical.”

For now, the fund has only $100 million, but that could change. The General Services Administration, the custodian of the fund, has requested another $210 million for it in fiscal 2019. 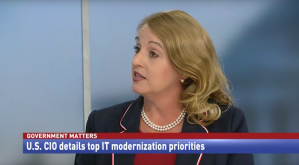