The head of the General Services Administration said Tuesday she believes the potential $310 million in total requested for Tech Modernization Fund should be enough to spark successful modernization projects across the government.

The recent omnibus bill approved $100 million in appropriations for the fund created by the Modernizing Government Technology Act late last year, and GSA requested another $210 million for the fund in fiscal 2019 — the last year in which the agency is authorized to request money for the TMF. Emily Murphy, GSA’s administrator, told lawmakers on the House Appropriations Subcommittee on Financial Services and General Government she thinks that sum will be enough as “a proof of concept.”

“It’s a revolving fund. It allows us to go and make targeted investments, get the return on those dollars, reinvest them into the next set of projects and have this as a continual improvement process,” she said. “It also should highlight areas where we can get demonstrable savings and then agencies can themselves come back and ask for additional appropriations as necessary.”

That’s short of the total initially requested for the fund. The MGT Act authorized up to $250 million per year for the fund in fiscal 2018 and 2019; President Trump had requested $228 million in his fiscal 2018 budget.

Murphy told the appropriators that GSA, as a member of the TMF Board and “custodian of those funds,” is “grateful” for the $100 million recently deposited in the centralized fund. Currently, the board is working to generate the most impact possible with that fund, meeting weekly to review plans and focusing on proposals that can be leveraged across government. “It’s not just a one-time fix, it’s something we get long-term return out of,” Murphy said, adding that successful proposals with focus on an “identifiable issue,” not something new.

The board has established criteria for evaluating proposals, she said, and currently it is reviewing the second round of business cases to “make sure that the investments that are made with the $100 million deliver returns to taxpayers.”

For that reason, Murphy said citizen services are a great use case for the fund. “One of the great uses of the Technology Modernization Fund would be to invest in citizen services, especially in a way we can leverage across other agencies.” It also has the backing of the administration, which recently made citizen services one of its major priorities in the President’s Management Agenda.

In addition to proposals that address common issues that can be scaled, she said, they want investments that “repay the fund quickly.”

Murphy also announced during the hearing that the TMF Board has appointed an executive director. A GSA spokesperson confirmed to FedScoop that Elizabeth Cain started in the role Monday. Prior to this, Cain was a financial management analyst for the Office of the Chief Financial Officer at GSA.

Murphy said during the hearing that the executive director “is going to help coordinate the technical reviews of those proposals, as well as the fiscal and business reviews of the proposals to make sure the dollars spent come back with a return on investment, that they’re able to repay the fund and continue that cycle of reinvesting.” 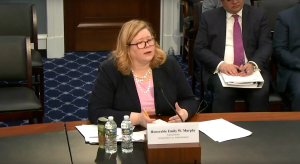