Kent told her team in a meeting that she will depart government service in July, an Office of Management and Budget spokesperson said. Her decision came as a surprise, but also less than a year in advance of a possible administration transition if President Trump is not re-elected in November.

“My commitment was to give 100% to improving government technology and citizen services. It is my hope that the outcomes achieved stand in evidence to that commitment,” Kent said in a statement. “It is with great pride in results delivered and confidence in Maria Roat, Grant Schneider, and Jordan Burris’ leadership, the OFCIO team, and the leaders in the CIO Council that I depart. It has been an honor and a privilege to serve our nation.”

She didn’t say what her next role outside of government would be.

Kent’s departure comes just weeks after hiring Maria Roat as her deputy.  Roat is likely to fill in for Kent after her departure. There’s no word yet on an official replacement.

“I want to thank Suzette for all of her work on behalf of the President. During her time at the White House she’s had a remarkable impact on Agencies operations, helping to drive critical modernizations through the President’s Management Agenda,” said acting OMB Director Russ Vought. “On behalf of the entire Office of Management and Budget, I want to express my deepest gratitude for Suzette and wish her all the best in this next chapter.”

President Trump appointed Kent, then a principal with Ernst and Young, the federal CIO in January 2018. She’s also worked with Accenture, Carreker Corp. and JPMorgan Chase & Co. during her career.

Kent was recently voted one of the Best Bosses in Federal IT. 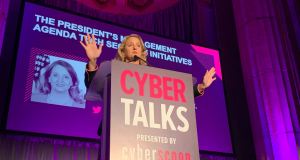