Deputy Federal CIO Maria Roat will leave her post at the Office of Management and Budget on March 31, sources close to the matter told FedScoop.

Prior to her appointment as deputy federal CIO in March 2020, Roat served as CIO at the Small Business Administration for nearly four years.

Before that, Roat was the chief technology officer at the Department of Transportation. She led the FedRAMP office at GSA before she moved to DOT. Prior to that she spent a decade at the Department of Homeland Security, including as deputy CIO of the Federal Emergency Management Agency and chief information security officer of the U.S. Citizenship and Immigration Services.

Alongside her civilian federal service, Roat had a 26-year career in the Navy until retiring from the department in 2007 as a master chief petty officer.

During her tenure as deputy federal CIO, she oversaw major initiatives including the recent launch of a governmentwide collaboration pilot by the Federal CIO Council.

Roat has also served on the board of the Technology Modernization Fund, which in 2020 received a $1 billion infusion through the COVID-19 relief bill, and has become a key source of funding for inter-agency modernization projects.

Commenting on Roat’s departure, Federal CIO Clare Martorana said: “Maria Roat has had a remarkable career serving our country — first as a military service member, and then as a Federal IT leader.” She added: “The role of the deputy federal CIO is crucial in providing a cross-government view of agency challenges and identifying opportunities to scale secure technology and sound data-management practices across government. We are grateful for Maria’s many contributions to our team, and we’re excited to see where her journey takes her next.”

Editor’s note: This story was updated to clarify that Roat led the FedRAMP office at GSA before moving to DOT. 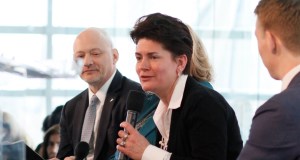