Cheriyan spoke at FedTalks about the need to consolidate federal data and move more services to a cloud-based infrastructure. Artificial intelligence will also be a key part of Cheriyan’s push to modernize.

“We are really well positioned to be a part of this change,” Cheriyan said about the prospect of using new technologies like AI to help modernize government IT. Acknowledging his newness to government, Cheriyan added that “in six years, I might be saying something completely different.”

Technology Transformation Services is GSA’s tech-focused group that aims to improve citizens experience with government through technology innovation. Its sort-of trademark initiative is the IT Modernization Centers of Excellence program, through which it contracts commercial vendors to bring best practices to federal agencies that most need them. Just this week, TTS awarded a blanket purchase award contract to companies that other agencies can call upon to fill specific needs when they are launching IT Centers of Excellence.

Cheriyan joined the agency earlier this year after retiring from the private sector. Motivating Cheriyan’s commitment to overhauling federal technology is a sense of giving back to a country he said he has “really benefitted from.” Cheriyan immigrated to the U.S. decades ago.

To streamline government systems, Cheriyan is spearheading an effort to consolidate redundant networks and data centers. Cheriyan hopes he can help make the need for TTS obsolete by embedding a culture of innovation and modernization across the federal government in each agency. 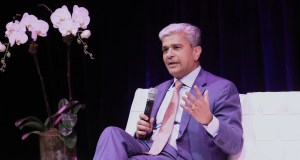