The Navy’s work to execute its portion of the Joint All Domain Command and Control (JADC2) strategy has a way to go, but the service is “headed in the right direction,” according to Adm. Mike Gilday.

Speaking Monday at the Sea-Air-Space conference, the Navy’s most senior officer said the service is in the third cycle of testing new technology this year as part of the program, but that challenges remain.

“We’re very excited about where it’s headed. We’re not satisfied with where we are. We have a way to go before we get to the point where we roll out strike group-wide in 2023,” Gilday said.

The Navy’s section of the JADC2 strategy is known as Project Overmatch, and its goal is to connect data multiple domains of warfare.  The senior officer added that he hopes that within a decade ships will have the connectivity to send all of their data over any network in a secure manner.

By having the ability to constantly share data, the hope is military command and control can be assisted by artificial intelligence that can generate more options for commanders orchestrating a multi-domain battle. It’s a tall order for a service beset with cybersecurity challenges and legacy systems the service recently started to modernize.

Rear Adm. Douglas Small, who is leading Project Overmatch, also said his office is still working on the foundational architecture and testing new tech. He said he has enough money and enough cloud computing to work through the technical challenges, but finding ways to actually share data have yet to be discovered.

Small said one of the most challenging aspects of the programs is transferring data across domains, from the air to sea to other parts of warfare. That challenge is augmented by the Navy’s geographic posture, having its ships being disconnected through miles of oceans.

The CNO said Overmatch and the JADC2 framework it follows is a priority for the service. It’s also a priority for other services and the department as a whole, that recently signed a JADC2 strategy. But so far, few enterprise capabilities have materialized beyond some battle management applications on ships. 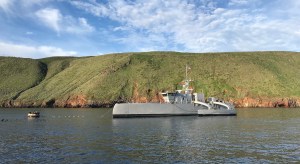