Technology transfer — the shift of early-stage federally funded research to the private sector for eventual commercialization — has found its slot in the Make America Great Again agenda.

“Our country is used to leading the world in technology innovation and service delivery,” Margaret Weichert, deputy director for management at the Office of Management and Budget, said Thursday at an event on “Unleashing American Innovation.” “And at one time, the U.S. government was the catalyst of much of that innovation.”

The current administration, she suggested, is committed to getting back there.

The event, organized by the National Institute of Standards and Technology, featured speeches from Secretary of Commerce Wilbur Ross, Weichert, Deputy U.S. CTO Michael Kratsios and many more — all focused on the commitments the administration is making to research and development funding and tech transfer. Indeed, bolstering tech transfer is among the cross agency priority goals (or CAP goals) that OMB has instituted as a way to operationalize the President’s Management Agenda.

CAP goal number 14, in fact, seeks to “improve the transfer of technology from federally funded research and development to the private sector to promote U.S. economic growth and national security.” Successful tech transfer, as shown by commercial success, is the return on the government’s R&D investments.

“The Federal Government invests approximately $150 billion annually in research and development conducted at Federal laboratories, universities, and other research organizations,” a fact sheet on the goal reads. “For America to maintain its position as the leader in global innovation, bring products to market more quickly, grow the economy, and maintain a strong national security innovation base, it is essential to optimize technology transfer and support programs to increase the return on investment (ROI) from federally funded R&D.”

The Department of Commerce and the White House Office of Science and Technology Policy will lead this goal.

In his comments, Kratsios explained how OSTP plans to push this CAP goal forward. “Future promises are not enough,” he said of federal R&D spending. “The taxpayer correctly demands that we justify why our spending is important and why it’s important today. We must focus on maximizing our return on federal investment.”

As such there are five strategies to implementing the CAP goal that OSTP and Commerce will pursue: reducing regulatory burdens, increasing engagement with private sector development and investors, building a more innovative workforce, improving access to innovative tools, and building understanding global innovation trends.

Tech transfer may face various “barriers,” but it does happen. Fed Tech, for example, is a technology transfer accelerator that grew out of the National Science Foundation’s I-Corps program. The program, funded by the University of Maryland and the Department of Defense’s MD5 program, matches would-be entrepreneurs, many of whom are students, with technologies developed in federal labs.

The entrepreneurs spend two months exploring whether there is, in fact, some commercial market for the given technology. About 50 percent of projects end after this time period, but some carry on, even going so far as to license the technology and begin to develop and sell a commercial product.

In conversations with FedScoop, Fed Tech participants on both the lab and enterprise side described this process as drawn out and a bit complicated — a reality Kratsios and others expressed interest in streamlining. 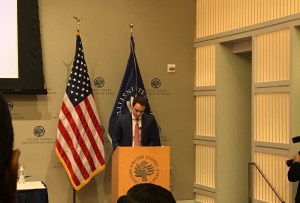 The Trump administration is bullish on tech transfer