The U.S. Department of Agriculture’s IT shop occupies offices along a west-leading corridor on the fourth floor of the Jamie L. Whitten Building on the National Mall in Washington, D.C. It’s long and tiled and bears more than a little resemblance to a high school. Each modest office — appointed by a few tables and some rolling chairs — has a nameplate disclosing the team within. At 12:30 p.m. on a Thursday the hallway is relatively quiet, save for some minor construction by the elevators.

This, if all goes according to plan, is where the IT modernization magic is happening. Welcome to the home of the USDA IT Modernization Centers of Excellence.

A “center of excellence” is an evocative concept. It promises the melding of expertise — private sector with public sector, insider with outsider — for the benefit of “best practices.” It promises “innovation” and the impetus to try new things. It even implies that there’s a certain audacious outcome to be expected — “excellence,” whatever that might mean.

And yet despite the fantastic branding, “center of excellence” is also a vague concept (a fact that hasn’t gone unnoticed by the private industry, whence this structure came). The term can be used to describe teams that do many different kinds of work, but FedScoop’s questions were even more foundational. What actually is an IT Modernization Center of Excellence? What does it look like? Does it occupy a physical space, or is it more of a concept? Who works there? How do they work? We took a tour to find out.

How we got here

The CoE concept had been rumbling around in the heads of White House tech leaders at the Office of American Innovation, and making the occasional appearance in public speeches, for a while before it was formally introduced last fall. The General Services Administration issued a request for information centered on four “key technology initiatives” in October 2017. In December, the White House announced that it had chosen USDA as the first host agency for the CoEs, citing “top-level commitment” from Secretary Sonny Perdue and CIO Gary Washington as the agency’s key recommendations for this honor. And finally, in March 2018, GSA announced the contract winners for Phase I of the project.

Ultimately, five contracts in five focus areas — IT Infrastructure Optimization, Cloud Adoption, Customer Experience, Data Analytics and Contact Center — were awarded to four companies. In April the contractors arrived in that west-leading corridor on the fourth floor of the Jamie L. Whitten Building, and promptly made themselves at home.

Each focus area team got a room and a couple of government detailees — seven USDA employees serve as subject matter experts in the initiative along with a handful more from GSA. All in all there are about 50 people currently working within the five CoEs, Executive Director Bob DeLuca told FedScoop. “We’re deeply embedded” in the USDA Office of the CIO, he said, briskly walking into one of the five or six OCIO office rooms the CoEs now occupy.

CoE Phase I: Understanding the ecosystem

Phase I of the CoE effort, as Joanne Collins Smee — deputy commissioner of the Federal Acquisition Service, director of Technology Transformation Service and leader of the CoE effort at GSA — will say, is an exploratory phase. It’s all about assessing where an agency is in relation to where it wants to be. At the moment, the agency in question is USDA, but the administration has the goal of moving the model, augmented by lessons learned in this first edition, on to other agencies in the future.

So what are the teams actually doing?

In the IT Infrastructure Optimization CoE room, with walls adorned by maps showing the locations of USDA data centers, the team is working with the Cloud Adoption CoE to close many of these data centers and move data to the cloud as appropriate. The teams, supported from the industry side by McKinsey & Company and SIE Consulting Group, have closed 20 data centers so far, Scott Finke, the deputy lead for the Cloud Adoption CoE, told FedScoop. The data centers that have been closed are marked in red.

Over at the Data Analytics CoE, supported by ICF Incorporated, the team is working on an ongoing USDA goal to develop a suite of data analytics dashboards for use by c-suite leadership. Chris Alvares, a USDA detailee on the project, said that by the end of the year, the agency will be the first to have a personalized dashboard for each executive. It’s all part of Secretary Perdue’s goal to create a “fact-based and data-driven” agency, he said.

The Contact Center CoE, meanwhile, has collected a lot of data on agency call centers and the work they do. Ultimately, team lead Meghan Daly told FedScoop, they hope to consolidate the agency’s disparate contact network, and use chatbots or artificial intelligence solutions to augment the human workforce.

Last but not least, the Customer Experience CoE has been talking with both internal and external stakeholders to learn what USDA customers need from the agency. Thus far the team has visited farmers and service centers in six different states across the country, Simchah Suveyke-Bogin, team lead and a detailee from GSA, said.

There’s a theme here — the CoEs aren’t exactly flashy disruptors intent on overhauling the agency with blockchain this or Internet of Things that. The projects they’re working on, like closing data centers and moving to the cloud, have long been a focus for CIO offices across the federal government.

So what does a CoE bring that the OCIO doesn’t?

“It helps tremendously to have somebody with an objective point of view come in and help you,” USDA CIO Washington said. The GSA detailees, as well as the CoE contractors, aren’t “married” to the way things have traditionally been done at the agency. “When you bring in a third party with an objective point of view that’s been there done that, it really helps change the thinking, you know, which helps change the culture,” he added.

Finke, who was a CISO at the USDA’s Agricultural Research Service before moving over to join the Cloud Adoption CoE, echoed this sentiment. The “outside perspective,” he said, is what makes a CoE’s work in this area different. Whether this distinction also makes the work more successful, however, remains to be seen.

All this — the maps of data centers and the five distinct teams and the visits to farmers in six states and the talking to agency call centers — will change, probably. Or at least it won’t continue in the same form, because Phase I is finite. This is the heart of the CoE inconsistency — yes, it’s a place with offices and people who work in those offices. And yes, it’s also a concept that may have more or less offices in more or less places with more or less people working in them in the future.

GSA anticipates releasing a request for proposals for contracts for Phase II of the initiative in August, but it hasn’t decided how many contracts it’ll grant or, obviously, to whom. Ask leadership questions about the specifics of Phase II and there will be plenty of shrugs.

For all the figuring-it-out-as-it-goes, though, Washington has only positive things to say about opening his offices to the initiative. “The Centers of Excellence framework that’s been implemented has kind of energized this department around modernizing,” he said. While it hasn’t been easy, it’s been valuable.

“I think it’s a great experience for any CIO that wants to implement change, and is very serious about modernizing,” Washington said. “This is a great framework to implement.” 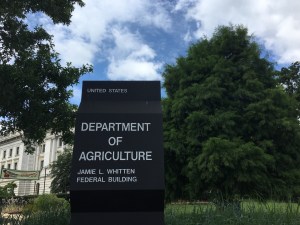 An exclusive look inside the USDA IT Modernization Centers of Excellence