U.S. Digital Service co-founder Erie Meyer will continue working to improve public sector digital services — this time outside the walls of the government as a member of Code for America’s leadership team.

In her role, Meyer will work closely with its National Advisory Council “to strengthen the network of Brigades, governments, and tech leaders making government work for the people and by the people in the 21st century,” the civic tech nonprofit announced Wednesday.

Code for America Executive Director Jennifer Pahlka and Meyer worked together previously in the White House during Barack Obama’s second term as president.

“I am thrilled to be reunited with Erie, having had the enormous pleasure of working with her at the White House in 2013-14,”  Pahlka said in a statement. “She has been a pioneer and leader in the movement to make government work better for the American people her entire career. Her coming to Code for America means the chance to apply her brilliance and unstoppable positive energy nationwide through the thousands of people dedicated to this idea, and the thousands more who will grow and strengthen the movement.”

Prior to helping launch USDS, Meyer served as a senior adviser to then-U.S. CTO Todd Park in the White House Office of Science and Technology Policy. She started in the federal government as founding member of the Consumer Financial Protection Bureau’s Tech + Innovation Team.

During her first few months with Code for America, Meyer will spend her time getting to know the “network of more than 60,000 tech experts, government staff, and community organizers who put technology to work for the benefit of their communities,” according to a blog post.

“Code for America is a national network of people asking not just how we can fix individual instances of injustice, but what are the systems that can create injustice, and how we can fix them.” Meyer said. “It’s an honor to serve alongside the thousands of people who invest their labor and their dreams in the idea that these systems must work for everyone.”

Meyer was one of FedScoop’s Top Women in Tech in 2016.

Hear more from Meyer about her work at the USDS in an interview with FedScoop TV below: 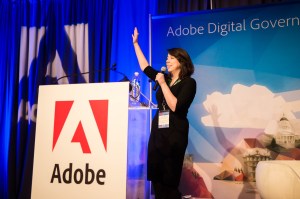