Employees at Code for America have reached an agreement with management on a timeline for voluntary recognition of a newly-established union at the nonprofit.

In a joint statement, both parties said they had decided that a voluntary recognition agreement must be signed on or before Monday, Oct. 18, and that a card check will then take place on or before Friday Oct. 22.

Under U.S. labor law, formal recognition of a union can be either granted voluntarily by an employer or through a secret-ballot election organized by the National Labor Relations Board.

The deal was struck late Friday following intense discussions in recent days over which employees will be eligible for membership of the bargaining unit.

According to sources, the nonprofit’s management has also agreed to drop law firm Jackson Lewis, which had previously been engaged to support the organization’s leadership with Human Resources and broader legal matters. The law firm has a track record for union-busting, including anti-union work carried out for management at technology giant Amazon.

Commenting on the agreement, Code for America CEO Amanda Renteria said the organization was working through the union recognition process as fast as possible, while also being “thoughtful and in alignment with our shared organizational values.”

In a statement, Code for America Workers United said the union looked forward to working in good faith with management at the nonprofit.

Staff at the organization in early August announced intent to organize throught the Office and Professional Employees International Union (OPEIU) Local 1010. The move came amid a sharper focus within the Biden administration on employees’ rights to collective action in the federal government and wider technology sector.

Negotiations between the two sides began on a positive footing, despite management at the nonprofit asking to delay talks to train senior staff in working with a union.

Earlier this week, Code for America COE Amanda Renteria had said the nonprofit would “continue to act in good faith” in union recognition talks, but reiterated that the organization would make a decision on voluntary recognition in October.

Her comments, included in an internal memo, came as the organization attracted criticism on social media for the appointment of law firm Jackson Lewis to work on unit recognition. 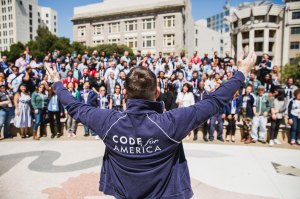