The U.S. Digital Service recommended the $248 million contract for an organ transplant system be bid separately from one for policy management because the current holder has denied nearly 100 federal requests to audit source code, reported The Washington Post.

USDS identified three alternatives to the nonprofit United Network for Organ Sharing’s Organ Procurement Transplant Network (UNOS) — which mostly operates from a local data center, rather than in the cloud, hindering efficiency and automation — in a Jan. 5 report for the Department of Health and Human Services‘ Health Resources and Services Administration obtained by The Post.

UNOS has denied federal government requests to audit code despite its system crashing for a total of 17 days since 1999, according to the report.

On average 22 of the approximately 106,000 people waiting for kidneys, livers and hearts die daily with several doctors telling The Post that UNOS is at least partly to blame for refusing to coordinate organ transport, in addition to its system requiring manual data entry, reprioritizing certain patients due to a programming error and sometimes taking a year to reflect updates.

“HHS should ensure that the OPTN uses a state-of-the-art information technology infrastructure that optimizes the use of new and evolving technologies to support the needs and future directions of the organ transplantation system,” wrote the National Academies of Sciences, Engineering and Medicine in a February finding echoing USDS’s.

UNOS Chief Executive Brian Shepard, who’s stepping down in September, likened the USDS report to an “op-ed” in his interview with The Post. Shepard said UNOS is working to improve OPTN’s tracking and developing a travel-planning app, and that a penetration test by an HHS-recommended firm and cybersecurity hygiene review by the Cybersecurity and Infrastructure Security Agency are planned.

OPTN has never been federally audited for flaws or cyber vulnerabilities because HRSA lacks the technical expertise, and UNOS holds its source code is a trade secret worth $55 million — offering only specific portions for official review, USDS found.

The Office of Management and Budget and HHS are coordinating on OPTN’s security, The Post reported, but the Senate Finance Committee scheduled a hearing over the matter Wednesday, after calling on the White House to intervene. 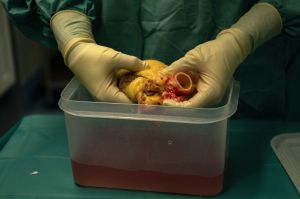