The Department of Veterans Affairs’ chief information officer wants to temper the excitement and expectations about the VA’s move to acquire a modern, commercial off-the-shelf electronic health records system to replace its current, decades-old technology.

The legacy EHR known as VistA won’t be disappearing any time soon, CIO Scott Blackburn said Tuesday at the AFCEA Health IT Day.

As the VA rolls out its modernized Cerner-based EHR over the course of 10 years, the department will have to continue to support and invest in its plagued Veterans Information Systems and Technology Architecture, Blackburn said. The department announced its plan last June to buy a Cerner system based on its interoperability with the Defense Department’s own new Cerner-based system.

With a primary focus on cultivating interoperability between its EHR and DOD’s, the VA announced late in 2017 that its rollout of the new EHR will follow the path of the system known as MHS GENSIS, which reached initial operating capacity at its first location in the Pacific Northwest region in February 2017. That means, Blackburn explained, that facilities at the other end of the country won’t receive the new EHR for quite a while. And those with the modern system will still need to support VistA to continue sharing veterans’ records across the country, he said.

“The Cerner implementation will take about a decade. If it’s starting in the northwest quadrant of the country and moving east, those on the Eastern Seaboard are going to be using VistA for about 10 years [more] or so,” he said.

Even though many on Capitol Hill are excited to say goodbye to the VA’s legacy EHR, which has struggled to reach the level of interoperability with the Pentagon lawmakers demanded, “We can’t starve VistA for the next decade,” Blackburn said. “That’s not fair to the people in Miami and the Eastern Seaboard who are going to be using that.”

“We’re going to have to make some very strategic, targeted investments to maintain the state-of-the-art nature of VistA, things like scheduling systems, whatever that might be, to keep that going,” he said.

Carolyn Clancy, the head of the Veterans Health Administration, agreed that the VA will need to continue to prioritize VistA investment in “anything that keeps patient care and the flow of that information moving.” But likewise, the department will need to continue to support VistA for educational and research purposes, as VA is a medical leader in both of those fields.

It leaves the VA with the classic bimodal IT conundrum — supporting the outgoing system until the new one reaches necessary capacity. It will require the VA to “maintain focus” and aspire to “continuous improvement as we learn lessons up in the Pacific Northwest,” Blackburn said.

“Maintaining two large systems for 10 years is going to be a challenge,” he said.

But it’s the kind of challenge Blackburn is up for. He’s a military veteran for whom modernizing the VA is a personal matter, and he said he’s more of a “turnaround and transformation type of guy” than an IT professional. He took the VA CIO role to lead exactly this type of meaningful change, he said, focusing more on things like customer service and organizational transformation than the internal plumbing of systems and new technology.

Blackburn also faces the uphill battle of training VA doctors — who are used to VistA and in his estimation enjoy using it — for the change.

“Our doctors love VistA. It’s user-friendly, they’re used to it,” he said. “This is one of the things where we need to be very careful, where if we just throw the Cerner system on, don’t give them a little bit of time, don’t give them an opportunity to provide feedback and design it themselves, then it will go very wrong.”

So, VA is tapping “an awful lot of” clinicians to provide feedback in the early stages to help better tailor the Cerner platform to their needs and wishes.

“We’re going to spend a lot of time, a lot of effort on that change management aspect of it so we take the best elements out of VistA, the best experiences that we possibly can, and infuse those into the Cerner system,” Blackburn said. 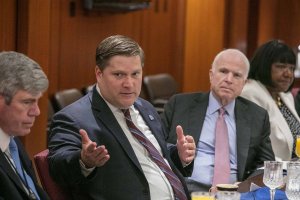 VA CIO: Expect another 10 years of VistA in facilities during new EHR rollout