The Department of Veterans Affairs is inventorying all of its data assets to ensure it’s at the quality needed to enable artificial intelligence, according to the senior adviser for strategic initiatives.

Paul Brubaker is spearheading a departmentwide effort among operating administration staff offices to get policy control of that data, he said Thursday at Swish’s GIST 2022 conference produced by FedScoop.

VA is integrating AI operations into its DevSecOps environment to speed up and remove humans from some decision-making processes, but more data is needed to understand veterans’ journeys and better deliver services to them.

“That doesn’t mean we’re not doing some things with AI today,” Brubaker said. “Particularly around network resiliency with identifying behaviors and applications and devices that we can get in front of an employee, identifying if things are crashing or not working well.”

VA remains in the early stages of the effort; AI algorithms lack a “robust” neural network or the ability to learn, but “it’s on the radar,” he added.

To that end, VA’s National Simulation Center (SimLEARN) in Orlando, Florida, is constructing a virtual test environment for a host of AI applications. 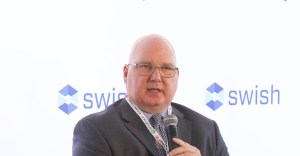