The Department of Veterans Affairs has paused the rollout of its massive electronic health record modernization project as the department has prioritized resources to respond to the novel coronavirus pandemic.

There is no new date for launching the Cerner-based system at a VA medical facility in Spokane, Washington, which the department most recently had scheduled for July after facing an earlier delay in February before the COVID-19 outbreak.

VA Secretary Robert Wilkie said in a letter to Congress that the Office of Electronic Health Records Modernization will need to “immediately shift to a non-intrusive posture,” without giving any greater detail of that shift. VA did not respond to requests for comment on the nature of the change in work.

Some elements of the $16 billion project remain on track. The backend tech for EHR is “99 percent” complete for the site in Spokane, Wilkie said in his letter to Congress. All except one of the 73 new interfaces are complete and “ready for testing,” he wrote.

“There is still much work we can accomplish during this unprecedented time for our Nation,” Wilkie wrote in the letter. “We have completed interface design, build, connectivity, and technical testing for all 72 interfaces required to support Go-Live for VA’s new EHR solution.”

The Joint Health Information Exchange between VA and the Department of Defense remains on track to be activated by the end of April, Wilkie said. The modernization aims to fully link the DOD Military Health System (MHS) Genesis and VA’s modernized EHR.

Ongoing deployment of DOD’s EHR was also paused due to the pandemic, but like the VA, its backend development remains on track. 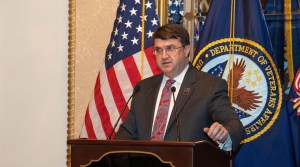