A Senate bill to create a third-party oversight board for the Department of Veterans Affairs’ big-ticket IT plans is picking up steam after the department announced recently it won’t meet its goal of launching it’s largest one, the EHR in March.

The Department of Veterans Affairs Information Technology Reform Act of 2019 — introduced by Sens. John Tester, D-Mont., and Marsha Blackburn, R-Tenn., last July — was approved in committee on Feb. 13 and set for floor action sometime this year.

“The new electronic health record system is too important to veterans’ health care for the VA to get wrong,” Tester, ranking member of the Senate Veterans’ Affairs Committee, said when he introduced another bill to oversee the EHR last year.

The bill’s momentum comes as the VA announced a delay in the go-live date for EHR. The department was supposed to launch the new platform at a Spokane, Washington, VA medical facility on March 28. But, “after rigorous testing of our new EHR, the department will need more time to complete the system build and ensure clinicians and other users are properly trained on it,” a VA spokeswoman told FedScoop last week.

“Moving forward, VA must establish stable leadership to provide sufficient accountability and robust oversight of this process, while being good stewards of taxpayer dollars,” Tester said in a statement after the delay of the implementation.

The VA does not have any updated go-live date or timeline, VA spokeswoman Susan Carter told FedScoop this week. The delay was caused by issues in training medical staff to use the new technology.

“We believe we are 75-80 percent complete in this regard and will be announcing a revised ‘go-live’ schedule in the coming weeks,” Carter said in an email.

The delay came after assurances from VA Secretary Robert Wilkie that everything was on track. Wilkie recently fired his deputy, James Byrnes, who was the top official overseeing the entire project. 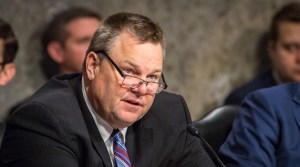