The Department of Veterans Affairs will stick with the existing records management platform that forms the center of its electronic health records (EHR) strategy following a review of its modernization program.

The agency in March launched a 12-week review into the $16 billion program, following the identification of failures including by the Government Accountability Office, which in February recommended that the VA stop work on the program to updates its health IT and scheduling system.

Speaking Wednesday at a press conference, VA secretary Denis McDonough said the department was committed to the Cerner Millennium records management platform, which is provided by health care technology company Cerner. The secretary said it will likely take two further weeks to determine additional changes to the program that will be made following the review,

Cerner is building a cloud-based system for VA that the department says will eventually be interoperable with the DOD’s Military Health System (MHS).

“That’s the coin of the realm,” said McDonough, commenting on the interoperability of the new system.

The next sites to get the system will be a network of hospitals in Columbus, Ohio.

Prior inspector general reports have warned that the VA’s legacy systems and infrastructure may not be able to handle the load of the cloud system and new health IT interfaces. 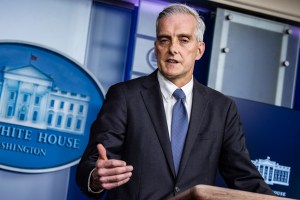